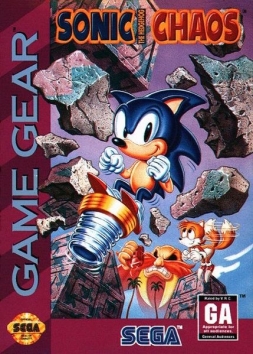 Released in 1993 for the Sega Master and a month later the Sega Game Gear, Sonic Chaos was the fourth game in the series. 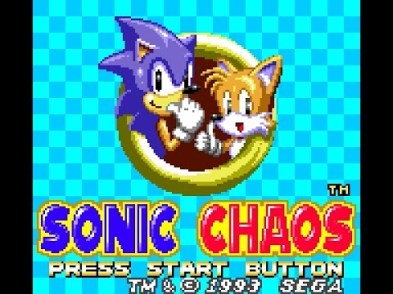 Dr Robotonik has stolen the red chaos emerald from South Island, with one of the emeralds missing, chaos and destruction are caused all over the island. Sonic and Tails are both informed that Robotnix plans to use the stolen emerald to power nuclear weapons and so they set off to put a stop to his actions and return the emerald to where it came from. 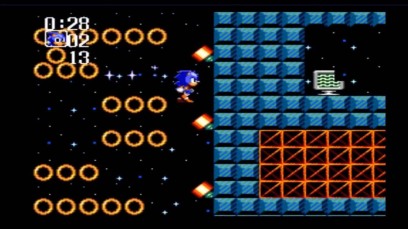 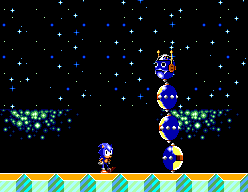 Sonic Chaos has two difficulty levels which are represented in the games character selection, Sonic is more difficult and has full access to the special stages in the game but has to traverse across the difficult platforming segments while Tails can fly over obstacles and even fly across water however Tails cannot access any of the special stages. Apart from this both characters play the same stages and fight the same boss battles. 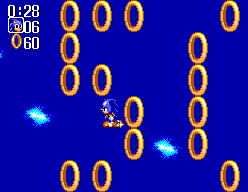 There are five hidden chaos emeralds in special stages through out the game, players can enter the special stages when they collect 100 rings in two stages from an Act, the gems are hidden in these stages and all of them must be collected to unlock the good ending as Sonic. 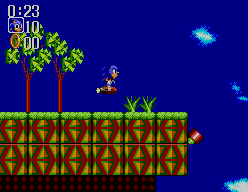 The rocket shoes are a new item in this game and they allow Sonic to temporarily fly making some of the platforming a little bit easier.

The soundtrack is medicore for a Sonic game and to be honest it feels like it belongs somewhere other the sonic universe, the music is ok but there isn’t anything special about it .

Sonic Chaos is a fun game, I much preferred it to Sonic CD, It is very short though I managed to finish the story mode with all of the chaos emeralds in just over an hours time.  Apart from its short story mode and medicore soundtrack the game is a blast to play through and is a good way to pass time, I wouldn’t personally recommend playing as Tails as I found the game easy enough playing it as Sonic.

I hope you enjoyed this review of Sonic Chaos. 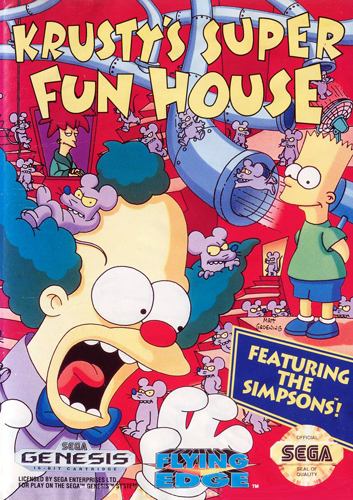 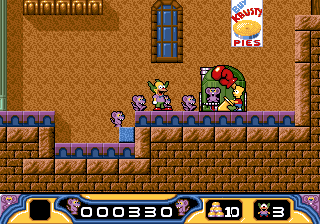 Krusty the Clown has had a rat infestation at his playhouse and with the help of various Simpsons characters he has to exterminate them.

In the game you play as Krusty, the game plays as a 2D platformer for the most part but the main aspect of the game is puzzles, during the puzzles Krusty must find and direct rats to their doom using different items such as blocks and buckets, if you place an item down on the ground the rats can climb on top of it to reach higher platforms and you need to keep doing this until they enter a machine which kills them. 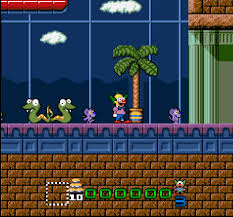 Krusty can obtain various weapons in the game which can destroy walls and enemies, my favourite weapon is the bog standard custard pie as it has a nice range and is fairly easy to hit your target. 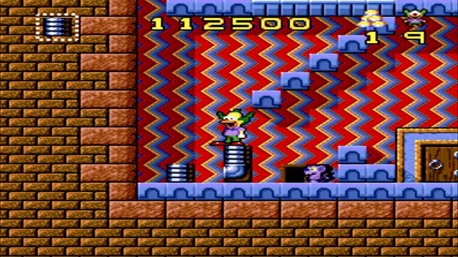 Graphically the game is ok no matter which version you play, the Gameboy version is black and white and the 8 bit versions are slightly less pixelated than the 16 versions of the game, the visuals are quite bland and do get a bit boring later on, the big issue is that a lot of sprite work had been copied and pasted making some of the later levels very difficult to navigate, the game play also varies from each version, they all follow the same formula but some systems ran the game substantially better than others, I played the SNES version of the game which was fine however I have heard that the PC versions such as DOS and Commodore Amiga suffered from a lot of slowdown.

All in all Krustys Fun House is boring, it was a drag having to play through the entire thing and the whole experience was just plain, dull and not very exciting, it has decent controls and ok graphics but its lame game play and looped soundtrack does not help the game shine in the slightest. 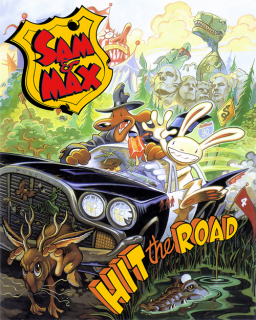 Sam and Max Hit the Road is the first release of the popular point and click adventure series which follow two anthropomorphic animal detectives as they try to solve various wacky crimes, the games are based on the original comic book series Sam and Max: Freelance Police which was created by Steve Purcell in 1987. 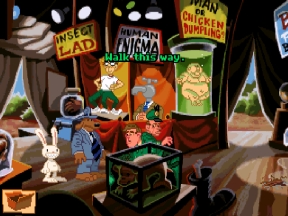 The game is based on a 1989 comic book release where Sam and Max need to travel to various tourist locations spread across America in order to find a Bigfoot that has gone missing from a local carnival. 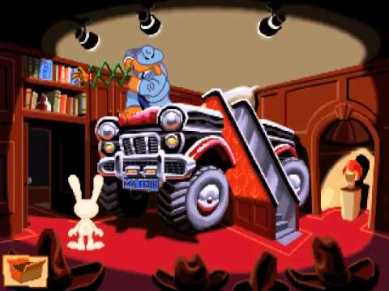 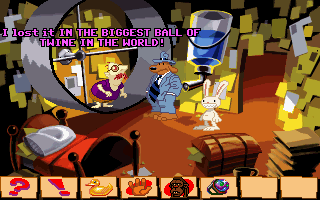 The game play is similar to any-other game of the genre you will need to collect random objects throughout the game and then either give those objects to those who may desire them or they can be used to solve puzzles, the game does add the ability to question suspects in order to gain clues about where the player should head next or how the player can get past some of the more difficult challenges the game has to offer.

For me although the game was a lot of fun like most point and click adventure games, the best part was the characters and dialogue, the game is filled to the brim with dry humour which coincidentally is one of the only types of humour I genuinely find funny   and let me just say that I was laughing my ass off throughout the majority of this game, I know a lot of people really like max for his psychotic personality and genuinely random moments but I have to admit that it was actually Sams character that I enjoyed the most, I found that Sam provided the majority of that witty dry humour that I love and although Max did this occasionally as well I just found it was funnier coming from Sam,  I don’t think it really helped that for the most part Max was fairy useless in this game, some of the puzzles require you to use Max in order to solve them but honestly this hardly ever happened and for the rest of the game play you take control of Sam which is a shame because I feel that Max would have been useful for a lot more puzzles that he actually was. 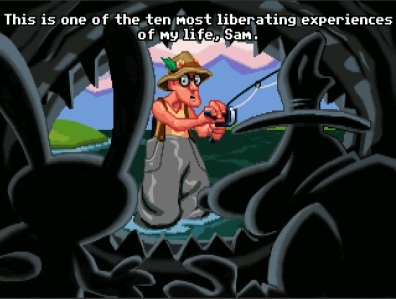 Apart from pausing and a few other commands the game completely uses the mouse and I had no issues at all with the general game-play however I did not like the few keyboard keys that were chosen for smaller things, for some reason you need to press F5 to go to the save menu and if I didn’t look up the manual I never would have figured this out, another key that I hated was pressing full stop to skip dialogue, its a really random choice when the developers could have easily chosen a much easier key that wasn’t in use, this wouldn’t be such an issue but when you keep having to speak to characters over and over again it can really get annoying having to keep listening to them repeat the same sentences.

The art style and visual choices in the game are absolutely outstanding, the colours are bright, the art is smooth and the many smaller details such as the use of shadows, creases in clothes and the density of different materials such as fur really help bring the game to life, not the mention the constant animations that run in the background of the game, the game has a few still image cut-scenes with some basic animation and if you weren’t actually playing the game you might think they were from a cartoon due to how much effort the game designers put into the visuals. 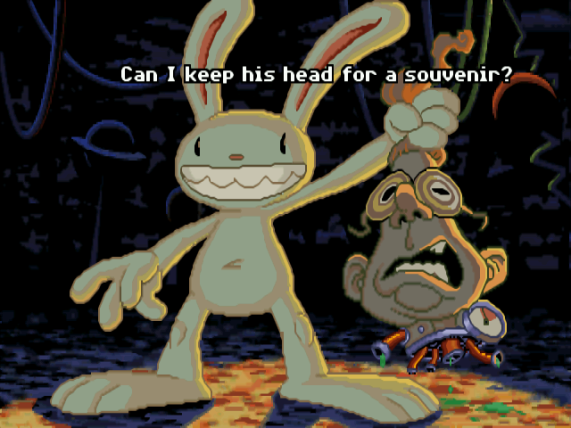 Sam and Max Hit the Road is a very good game which I think most people would really appreciate if they put aside some time to play it, It’s not perfect but its an innocent title that provides a lot of laughs and will leave you with some fond memories, I cant say I enjoyed it as much as I do Sierra Games but Lucas Art did a great job with this before the series got taken over by Travellers Tales 7/10

I hope you enjoyed my review of Sam and Max Hit the Road for Microsoft Windows and MS DOS.

By the way you can get yourself a copy of this game for fairly cheap via GOG.com