I feel that I am on a Quest to find a Kings Quest game that I will love, I am yet to find King Quest Gold but I may have found some very fine Silver with Kings Quest 3: To Heir is Human.

You don’t play as King Graham this time around, instead you play the role of Gwydion a slave of the evil wizard Manannan, the wizard has a habit of adopting children at birth and raising them to be his slaves and killing them as they reach adult hood on their 18th birthdays. I gather that Gwydion figured this out and now has to escape as he is nearing his 18th birthday. 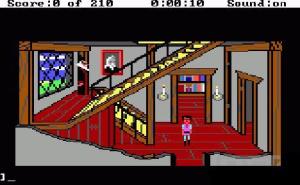 The plot is a little more complex this time around but not so complex that it may confuse its younger audience, again there is a more in depth look into the plot located inside the games manual.

Just like in kings Quest 2 you are not able to use the mouse at all within the game but using just the keyboard to move and communicate with game works perfectly, I had no issues at all with the controls during my playthrough.

Kings Quest 3 surprisingly has a similar yet also rather different game play style to the first two games.

and the Three Bears from Goldilocks 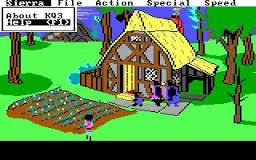 the game is also time based, during the game you will have a certain amount of time to perform certain tasks, the most important of all of these tasks is getting rid of the wizard, when the clock reaches 5 minutes the wizard will embark on a journey and then you have 25 minutes to leave the house to collect the ingredients for a transformation spell.

Time based tasks like this work really well and help add a lot more challenge to the game but there are times when the time based sections of the game don’t work at all.

For example one section of the game has you hiding in the hold of a pirate ship until it reaches land, there is noting to do in the hold and you have to wait for at least 10 minutes, this section really sucks and could have benefited from a mini game of some sort. 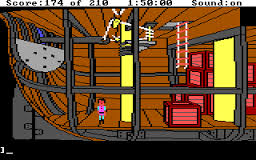 Earlier I mentioned spell casting, casting spells is a really important part of the game you can cast spells by collecting certain ingredients and following instruction for the spell in the wizards secret laboratory.

These spell instructions are actually located within the games manual and this is really cool because it makes it feel like you are reading an actual spell book,this was also a really clever way to prevent people who pirated the game from reaching the games ending and eventual plot twist.

Kings Quest 3 provided more audio than the previous games, sure it wasn’t much more but it was enough that it kept the game interesting, my biggest issue with the first two games was the lack of audio because honestly it made them a little bit boring, because of this I really appreciate the extra bit of love from the audio department for this instalment of the Kings Quest series.

Overall this is my favourite Kings Quest game so far, the inclusion of a new character, a new game play style and the extra effort put into the audio was much appreciated, also it was really cool that Sierra had the player use the manual to communicate with the game.

Kings Quest 3 was really fun and I had a great time playing it, but sadly it suffered from some really annoying issue with a couple of the timed events and this prevented the game from not just being a good game but a great one and that really sucks 7.5/10

I hope you enjoyed this review of Kings Quest 3

if you respect my opinion, I will respect yours

23 thoughts on “Kings Quest 3: To Heir is Human Review”