The Marvel Cinematic universe is a series of films and television series based on Marvel comics, the MCU consists of many films, television shows and one off productions which make up a new shared universe for the various Marvel properties , the movies and television shows are not released in chronological order so the timeline can get extremely complicated but thankfully the wikipedia page can be read to help you get a better understanding of where in the timeline each movie and TV show takes place.

I will only be briefly covering each movie in this discussion, each phase will be released as part of its own blog and I wont be discussing the shows mostly due to time constraints which I hope that all who reads this will understand.

In 2008 we got Iron Man which was the first movie to be released in the MCU now with it being the first movie its not expected to be amazing and to be honest it isn’t but that doesn’t mean its a bad flick, Robert Downey Jr plays the playboy billionaire Tony Stark and no better actor could have been cast for this role, Downey gives a snarky, funny and witty take on the character and it works to this films advantage considering the rather dark nature of plot, the rest of the cast are also well suited to their roles and I have tip my hat to Gwyneth Paltrow who plays Pepper Potts because if it wasn’t for Robert Downey Jr her performance would be my favourite part of this entire movie.

One thing that really helps Iron Man to stand out as a brilliantly shot film is its pacing a characters personality can be explained in just a few moments with the right directing and a consistently good pace, the villain wasn’t too memorable if I am being completely honest Jeff Bridges gives a very manipulative and sly performance for the character of Obadiah Stane but I never really understood the motive behind why he wanted to kill Tony Stark, apart from this Iron Man is a great movie and a good start to the MCU and after it got released fans couldn’t wait for the next film to be released.

The Incredible Hulk is incredibly bad, after watching Iron Man and being so impressed with its production value and pacing, The Incredible Hulk is the complete opposite, the pacing is all over the place and the movie is extremely boring, the actors are ok at playing their roles but I wouldn’t say they were the perfect casting choice, the biggest issue with this movie is its writing, the film is a more dark and grittier version of the The Incredible Hulk and a serious Hulk movie could have worked if most of the film wasn’t just Bruce Banner using his computer, the actual Hulk hardly ever gets any screen time but when it does the film is much more entertaining, the CGI is also terrible when compared Iron Man because at least in that film the computer generated segments looked real but here it looked as if I was playing the Incredible Hulk video game and it really took me out of the only decent part of the film, if I was you I would skip this one and just read a synopsis on IMDB.

Taking place a few weeks after the original film Iron Man 2 is the best film yet, where the first film was really well paced and gave us a fantastic cast of characters the same can be said here, the villain in Iron Man 2 is much more memorable than the villain in the first movie and he has a much better motive for performing his actions against Tony Stark, where the last film in the MCU failed due to being so slow and boring Iron Man 2 has a lot more action and fight scenes to look forward too as well as this we get a lot more character development between Tony Stark and Pepper Potts who are having issues in the movie due to how Tony’s ego as Iron Man is ruining their relationship, Iron Man 2 is an excellent movie which makes up for just how terrible the Incredible Hulk was. 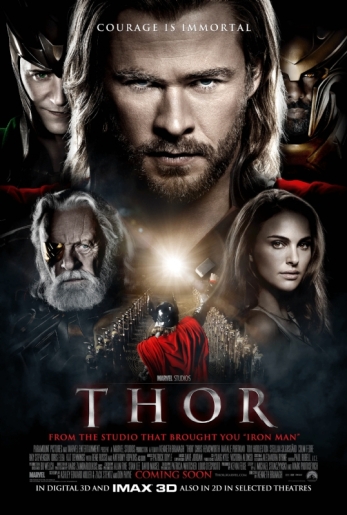 After the success of Iron Man 2 there was a lot of hype for a movie based on the god of thunder, Thor is one of the funniest films in the MCU due to its writing, it takes the cliche approach of a person from another realms ends up on earth and hyjinks ensue, many different films have taken this approach and most have failed due to lazy writing but Thor is definitely an acception for the genre, to be honest the best parts of the movie take place in Azgard due to the lush imagery and outstanding CGI but when Thor does get banished to earth the film quickly turns into an action – comedy  and it pulls this off really well with very suptle jokes and quick humour, the villain Loki is one of the most beloved of the MCU and here he isn’t the Loki that we have grown to love just yet as he doesn’t quite have the sense of humour the fans love, but we have the Avengers to look forward to that, either way Thor is an excellent entry in this Phase of the MCU and I highly recommend seeing it even as a standalone film.

Captain America the First Avenger is one of my favorite Marvel movies period, it’s based in the 1940’s and is filled to the brim with classic 1940’s visuals and set designs which will surely put a smile on anyone’s face who enjoys older films, the film has a lot of great action scenes when Steve Rogers turns into the super soldier Captain America but surprisingly I found that I enjoyed the skinny and weak Steve a lot more, he seemed more real and due to this I felt more emotions towards him, Agent Carter plays a big role in the movie and she quickly becomes the love interest, this film actually has gotten me quite hyped for when I will be reviewing the Agent Carter TV series when we eventually get there during Phase 2, either way Captain America the First Avenger is an excellent movie which introduces many older Marvel characters including the previously mentioned Agent Carter and a young Howard Stark before he fathered Tony Stark, you can watch this film before any others if you wanted too as its chronologically the first in the timeline and I highly recommend doing so.

The Avengers is one of the most hyped films of all time, when you think about it this entire phase of the MCU was building up to this movie, during the post credits sequence of Thor, Nick Fury shows Eric Selvig the tesseract unaware that his mind is being controlled by Loki and eventually allowing Loki to take advantage of its power, every-other after credits scene saw Nick Fury gathering all of the heroes to help make up the Avengers which are needed to work as a team to stop Thor’s evil brother Loki from taking over the planet.

The movie was directed by Joss Wheaton who is best known for creating the hit show Buffy the Vampire Slayer and he was also a writer of the team that brought us Disney Pixar’s Toy Story, Joss Wheaton did an excellent job directing the Avengers I wouldn’t go as far as saying that its one of my all time favorite movies but its blend of clever comedic moments, awesome special effects and a great cast makes it a memorable time for anyone.

4 thoughts on “The Marvel Cinematic Universe Phase One”