Hello and welcome to Spongebob month, throughout August we will be taking a look at all things Spongebob including the television series, two movies and four video games.

Spongebob Squarepants was created by a Marine Biologist named Stephen Hillenburg who first began development of the character in a book called the Intertidal Zone which he created to help teach his students.

Before Spongebob there was Bob the Sponge, this character was the lead in the Intertidal Zone and would tell readers interesting facts about marine life and creatures who live under the sea.

Hillenburg struggled to sell his book to publishers and eventually decided to take a masters degree in art where he created a short film named Worm Holes. This Short-film was played in many film festivals including the 1992 Otawa Festival where Stephen Met Joe Murray the creator of Rocko’s Modern Life who was so impressed with Hillenburgs work he offered him a job to direct and work on Rocko’s Modern Life.

During his time working on Rocko, Hillenburgs colleague Martin Olsen read the Intertidal Zone and encouraged Hillenburg to use his expertise in Marine Biology to create his own animated series, Hillenburg had never thought about making his own cartoon before but he decided to give it a go and wanted to focus the premise of his show on the strangest sea creature he think of and eventually decided on a sponge.

When creating a pitch of the show for Nickelodeon it was originally called Spongeboy Ahoy ! the show was accepted as long as some changes were made including name which of course became Spongebob Squarepants, the pilot episode was released in 1999 and from there it became one of the most successful animated series of all time and is still being aired today with new episodes being made after Hillenburgs passing in 2018. Hillenburg hit the jackpot with Spongebob gaining himself a net worth in the millions. Spongebob is a very important TV series in the history of animation, it had many high points and low points as many shows do.

Many would argue that the later seasons were no where near as great as the first three seasons and the first movie and I tend to agree but I still love the property even if it has over stayed its welcome a little bit.

The show is still going after 20 years and it has spawned many types of main stream media, recently there was even a Broadway musical which I may get around too on a future Spongebob Month but until then lets take a deep dive into some of Spongebobs video games and the two current movies and I will see you in the next installment Spongebob Month 2020.

Harry Potter and the Prisoner of Azkaban was released on the eighth of July 1999 and is the third book in the Harry Potter franchise, for a lot of people this is their favourite book in the series and I can see why, for one its scarier and darker than both its predecessors with maybe a few exceptions in the Chamber of Secrets plus it introduces some fan favourite characters including convicted murderer Sirius Black and the new defence against the dark arts teacher Professor Lupin.

After his some what demise in the last book the lack of Lord Voldemort is not too much of an issue especially with the addition of Sirius Black being a potential threat as well as the terrifying Dementors who are guards at Azkaban, the Dementors will suck out the happiness of anyone who comes near them and what makes the Dementors even more frightening is their kiss, a Dementors kiss will not only suck out a persons happiness but also suck out their soul leaving the victim to a fate worse than death, Harry learns a new spell called Expecto Patronum which can help fend off the Dementors protecting Hogwarts Castle from Sirius Black.

As with the previous books a few moments in the Prisoner of Azkaban differ from the film however not much really stands out here, for example an entire section focusing on Harry Receiving a Fire Bolt broomstick is in the book but in the film Harry doesn’t receive it until the very end completely skipping over this plot point, the big twist with Scabbers is focused on more in the book and Hermiones new cat Crookshanks actually plays an extremely useful role here unlike in the film.

Harry Potters third adventure is yet again an excellent read and is a great addition to the franchise, I can understand why a lot of people really love this book but personally I still enjoyed Chamber of Secrets slightly more.

After the massive success of Mario, Sonic and the Legend of Zelda making it big in the world of 3D gaming it was of no surprise that the rising video game star Rayman would soon be joining them and the result was one of the most beloved games of all time Rayman 2. 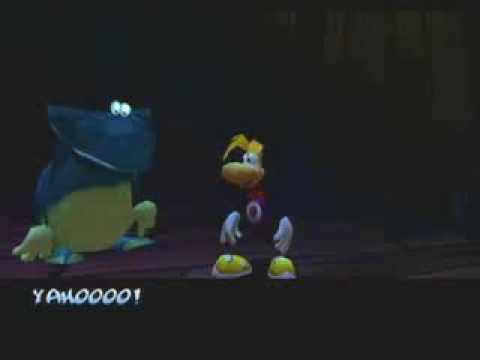 Every resident of the Glade of Dreams including Rayman has been captured by an army of robotic pirates led by Admiral Razorbeard, the reason behind doing this isn’t explained very well and my only guess is that they are only doing this because they want slaves.

Rayman manages to escape the Prison Ship and returns to the Glade of Dreams, here he finds out that the pirates have destroyed the heart of the world causing Rayman to lose his powers,luckily a new fairy called Ly is on hand to help rayman regain his powers while he is on his quest to rescue all the slaves from their kidnappers. 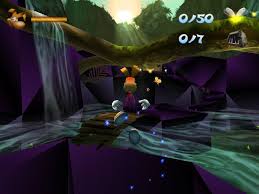 Similar to its predecessor Rayman 2 is an action platformer and the only major difference here is that this game is 3D and apart from that everything else is essentially the same, Rayman can run, jump, hover and grab and swing from pink rings, throughout the game you will sometimes run into Ly the fairy and when you do she will either give you a new power or she will enhance  power you already have making it more powerful and useful for example you can get a hover expansion which allows Rayman to fly in certain areas. 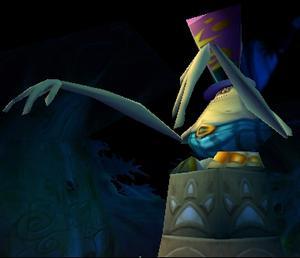 The main objective of the game is that Rayman needs to find and collect four ancient masks in order to awaken the god Polokus, once awakened Polokus can help Rayman by destroying all of the Pirates who remain in the Glade of Dreams while Rayman returns to the prison ship to take on Razorbeard. 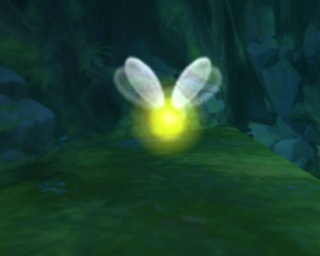 There are still some fetch quests for Rayman this time around but luckily they are not required, one of the objectives is to find and collect all 1000 yellow lums (800 in the PS1 version) these yellow lums make up the heart of the world that was destroyed by the pirates, they are spread all over the glade of dreams and collecting them all gives bonuses in certain versions of the game in the PS1 version you will unlock the beta level of the original Rayman 2 before the game was made into 3D and in the pS2 and PC ports  you will unlock a minigame for each level that you collect all of the yellow lums, the PS2 and PC version also allow the player to purchase new upgrades and abilities using the lums you have collected.

Another collectible in the game are the familiar spirits, these creatures have been locked in cages all over the land, Rayman can free these spirits in a similar manner to first game by simply punching the cages, in the PC and PS2 port if Rayman brings these spirits to Ly the fairy he can take part in different minigames that he can try to beat in order to gain a health expansion. 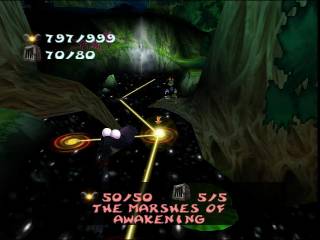 In most versions of the game Rayman will travel throughout the Glade of Dreams via the Hall of Doors a magical portal to each stage in the game.

The PC and PS2 ports of the game scrap the Hall of Doors for an open world environment that Rayman can use to access all of the stages while also using the hub world for access to new content such as the shop and Ly’s minigames.

I have played a lot of 3D platformer’s in my time and out of all them this one has the best control and the smoothest frame rate, this was a big surprise to me because Rayman has so many abilities that it should make some of the games main mechanics quite difficult but instead everything is perfect and it feels great, this came out on the same systems as Mario 64 and Crash Bandicoot but it feels better than some of the more modern Mario Games and that is just mind blowing. 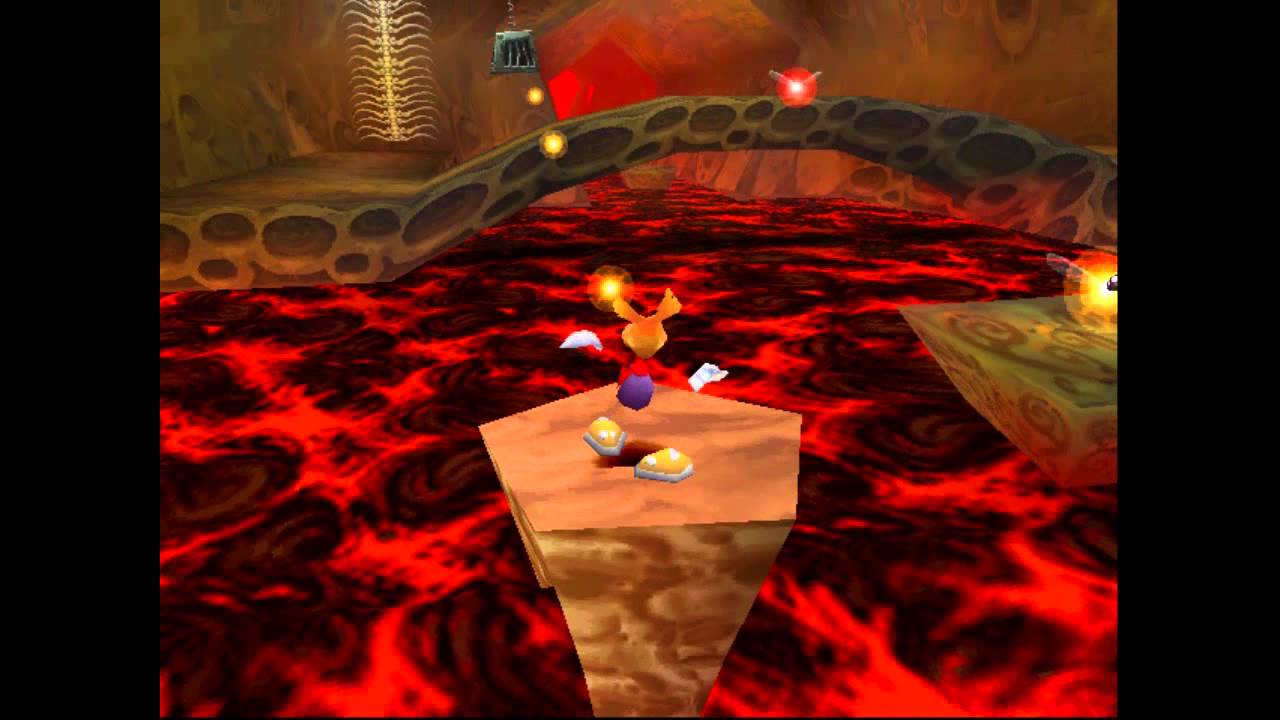 The visuals in Rayman 2 are obviously going to be very different to the original game due to the leap into 3D, I like the visuals here but it’s hard to love them after playing the first game where its visuals were absolutely outstanding, the new look and style brought to Rayman 2 is nothing more than just ok and don’t get me wrong they are not by any means bad graphics, for the time they were up to par with the systems it had to work with, its just nothing about them is really unique or memorable which is more of a disappointment than an actual problem.

The soundtrack unfortunately has the same problem but in my opinion its worse, no music in this game made me sing along or made me feel any emotion, I’m sure there are people out there that love the soundtrack presented here but for me it was nothing more than generic and uninteresting.

Rayman 2 is a really good game but its not quite as unique as the original and that’s not really a bad thing especially considering that they are completely different experiences, the story is interesting, all characters are likable, it controls great and the only real disappointment were the visuals and soundtrack and even then that’s just a personal preference.

In my opinion I wouldn’t say that Rayman 2 is quite as good as the original game but I would recommend it out of the 2 of them its still a great game and the lack of needed fetch quests does make it a lot less stressful. 7.3/10

I hope you enjoyed this review of Rayman 2: The Great Escape