Castle in the Sky is technically the first movie under the Studio Ghibli name but it is recognised by the company as their second film after Nausicca of the Valley of the Wind.

Its a fantasy-adventure film which was written and Directed by Hayao Miyazaki. 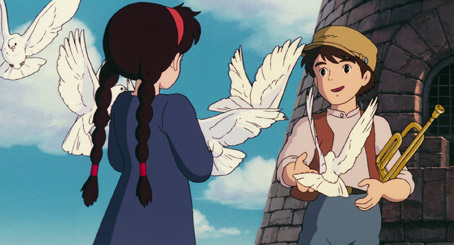 After an attack on an airship a young girl named Sheeta falls slowly and lands in a small town where she is discovered by an adventurous orphan boy called Pazu, who takes her into his home to take of her, not long after this they are attacked by the pirates who want to steal Sheetas necklace which holds mysterious powers.

The Pirates are my favourite part of the film they are really funny and often cause epic and comedic chase sequences between them and the two protagonists, another reason I like these characters is because they are not just typical villain characters they do have hearts and at times even help the two children in their adventure to keep Sheeta safe. 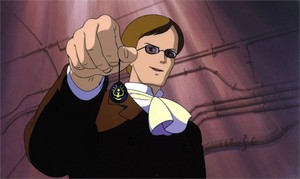 The main antagonist of the film is agent Muska who had originally abducted Sheeta in the beginning of the movie and hunts her down throughout the adventure, like the Pirates he also wants the necklace but his intentions are to use it to take over Laputa (Sheeta’s home land) he is voiced by Mark Hamill in the English Dub of the movie.

While I do like the animation of the film I much prefer its soundtrack, the music was composed by Joe Hisaishi.

The soundtrack is beautiful and matches the theme and pacing of the film extremely well, it has hints of adventure with hidden moments of sadness and wonder which works to emphasise the films emotions.

Castle in the Sky is a fantastic movie it blends various genres together, fantasy, science fiction, steam punk, comedy, action and adventure and it does thsi extremely well for an animated feature, its intense but also charming and romantic, its a film that I feel that no matter what age you are you will love it, its one my favourite animated films and I would recommend it to anyone who enjoys fast paced movies with a lot of heart and imagination.

I hope you enjoyed this review of Castle in the Sky