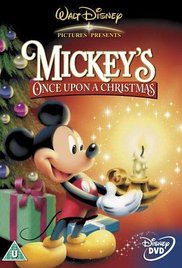 Mickeys Once Upon a Christmas was a massive deal when it came out in 1999 and I fondly remember my mother fighting her way through our local Tesco’s (Our version of Target for you Americans) to get it for me so we could watch it together on Christmas Eve that very year.

By the way this is not the Christmas Carol with Disney Characters, that movie came out in 1983, this is an anthology of three Disney cartoons which all share a similar Christmas theme and have slightly altered morals for the kids to learn from

The first cartoon titled Donald Duck stuck on Christmas is a holiday classic. Huey, Dewey and Louie wake up on Christmas morning and act like little dirt bags throughout the day, they open their presents before the family arrive, they go outside on their new sleds without reading the card from Uncle Donald and Aunt Daisy and when the family sings Christmas carols they play with their toys instead, later on that night the boys wish upon a star that it could be Christmas every day, their wish is granted and a massive time loop begins where they are repeating the same Christmas over and over again until they eventually learn to stop being so selfish.

A Very Goofy Christmas is the next cartoon to be shown and whats particularly cool about this one is that its actually a cartoon which takes place in the Goof Troop universe but the catch is that Goofy’s son Max is still a young child here so its actually a prequel to Goof Troops first episode, in the cartoon Goofy and Max are having relationship problems after their neighbor Pete tells Max that Santa doesn’t exist and its up to Goofy to prove to his Son that Santa is real, but Max is so torn up about what Pete told him that he manages to convince Goofy that Santa being real is an impossibility which leads Goofy down a path of pretty major depression and its up to Max to cheer his Dad up, about mid way through the cartoon Goofy makes Christmas dinner for a poor family who could never afford to do it themselves so this segment actually has two messages the first is to always respect and be charitable to those less fortunate than yourself and the other is to quite simply not be a complete arse by telling an eight year old that Santa doesn’t exist, honestly I don’t why Goofy didn’t just pelt Pete in the nose.

The final segment Mickey and Minnie’s Gift of the Magi is based on the classic short story by William Sydney Porter where a couple go to extreme lengths to get Christmas gifts for each other and both of them even go as far as selling their prized possessions just so they can afford the perfect gift, this cartoon follows that same idea and also has a very similar ending, this may sound like the most boring cartoon out of the three of them but to be honest its probably the best one, its short, simple and it has the most Christmas themed message of them all which is that the greatest gift you can give on Christmas is yourself and you can give that by simply spending time with your family and loved ones.

So is Mickeys Once Upon a Christmas the greatest Christmas movie to be based on classic Disney characters? no its not even close but its still pretty good,  I can’t consider any of the cartoons to be bad but at the same time apart from the last one the first two are not great but they are still entertaining and with voice talents such as Jim Cummings and Bill Farmer involved its definitely worth a watch, even Kelsey Grammer is in this movie voicing the narrator and that in itself makes it worth your time to sit by the fireplace and watch these silly but wonderful Disney cartoons.