Castlevania: The Adventure was the third Castlevania game released chronologically and was the first title to be exclusive for a handheld system, It was developed and published by the video game developer Konami, it was released in 1989 for the Nintendo Gameboy in Japan and North America prior to a 1991 release in PAL regions.

The game is set 100 years before the events of the first Castlevania game and stars Christopher Belmont who after years of Dracula causing havoc decides he’s had enough and travels to his castle ready to slay him.

The gameplay is fairly standard with it being a very basic 2D action platformer, in traditional Castlevania style you attack with the whip which can only be used in the direction you are facing so quick reaction times are a must in order to survive, it should also be noted that Sub Weapons are not in the game, a very odd choice which really takes away from the experience.

Quick progression is very important in the game since players are given a time limit to finish each of the four stages and their boss, overall the game is very short and I didn’t find the time limits to be anywhere near running out as I completed each level, as usual there are limited lives but there is little reason to worry because continuing from a Game Over only makes you repeat the stage you died on.

The boss fights are very forgettable and its a shame because in the two previous titles the boss fights were at least interesting and had some strategy and weaknesses to sub weapons, here they all feel very much the same and die fairly quickly.

I can at least say that while its not as good as before, the music here is really fun and is impressive for Game Boy standards, I would argue that the music may be the best part of the game due to the rest of it lacking in many ways.

Castlevania: The adventure is extremely disappointing as an entry in the Castlevania series, due to its limited stages, lack of sub weapons and overall boring gameplay nothing about it stands out compared to what we have had before, even the infamous Castlevania 2 is more enjoyable as a gaming experience than what we got here, the controls are clunky and the hit detection is a little off making the whole game even more frustrating than it needs to be, it had a good soundtrack but that’s about it and unfortunately I really cannot give this a higher ranting than a 2.5/10.

I am only grateful that the next Castlevania game I am reviewing is at least another good one so please look forward to that. 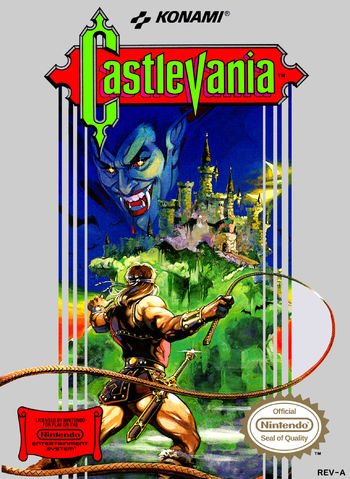 Finally after all this time I get to talk about one of my favourite video games of all time Castlevania.

Every one hundred years Count Dracula rises from his coffin and wreaks havoc on Transylvania, each time Dracula comes back he is defeated by a member of the famous Belmont family who have been protecting Transylvania from supernatural threats for generations, the year is 1691 and once again Dracula causes trouble attracting the attention of Simon Belmont who along with his trusty whip makes his way through Dracula’s castle hoping to defeat the evil vampire lord.

The game is an action plat-former and takes place in different areas of Dracula’s castle, players will need to survive a number of levels before facing a sub boss, the platforming is ridiculously difficult and not with good reason, Simon attacks enemies by either whipping them or hurting them with a sub weapon, this is fine but the problem is that if you are hit by an enemy you dont just take damage but also get knocked back and lot of time this leads to Simon falling to his death, this was obviously programmed into the game in order to add additional challenge but honestly the game is so difficult anyway that this is just annoying.

For example the image above is just two screens of the game and as you can see there are a lot of things to avoid including a lot of Fleamen which are some of the most difficult enemies to avoid in the game. 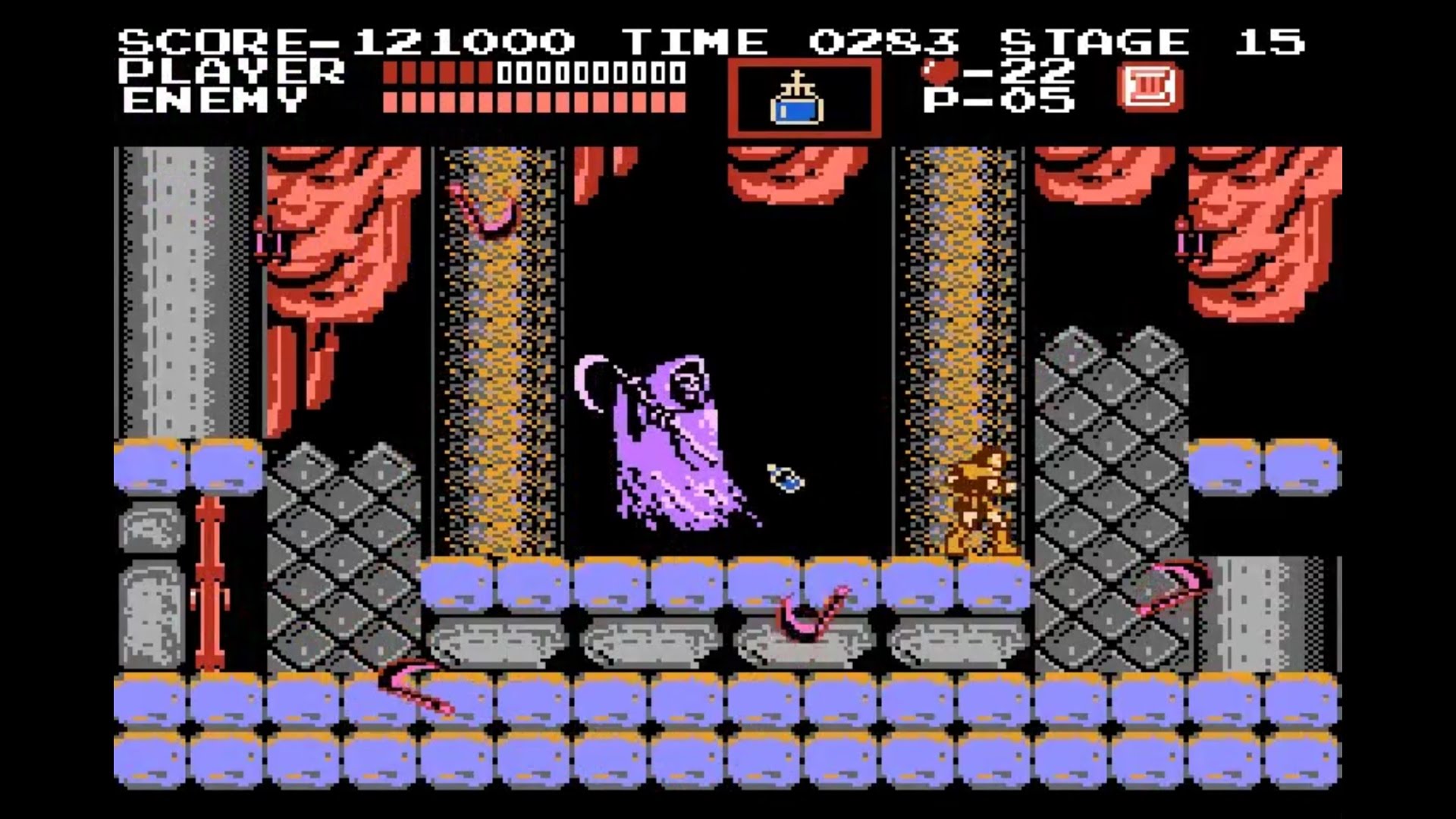 The first is Pork Chops which you can find hidden in the walls and if you eat these they will restore your health.

Next you have sub weapons such as daggers, crosses and axes which can be used at the expense of some of the hearts you can find by whipping all of the candles throughout the game, all of these sub weapons are great however the best and most useful is the Holy Water, this is the easiest way to kill most of the bosses in the game including the notorious fight with the Grim Reaper and even Count Dracula himself.

Collecting the Sub Weapons can become even more useful when you find the upgrades, you can make your weapons up to three times more powerful by finding power-ups which are mostly found in candles or bricks but can appear randomly too.

Easily one of the best soundtracks in the NES library Castlevania has one kickass music library, the music is bouncy and fun but does have a creepy vibe to it now and again, but in general the music is so catchy that I guarantee you wont be able to remove it from your brain, my personal favourite track in the game is called Wicked Child and is the theme for stage 7.

Castlevania is an amazing game but I wouldn’t call it a masterpiece the controls are a little stiff and the game is way more frustrating than it needs to be, on the other hand everything else is perfect the visuals are fantastic for an early release, the soundtrack is one of the best and the game is genuinely very good, for the first entry of the series its a really good start but it could have done with a few more tweaks 7.9/10.

I hope you enjoyed this review of Castlevania for the NES