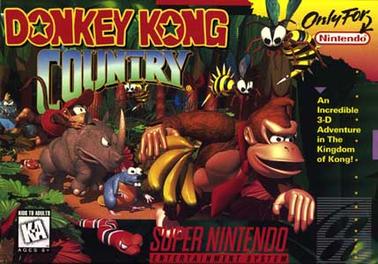 Donkey Kong Country is a 2.5D plat-former that was developed by Rare Ware for the Super Nintendo Entertainment System, the game came to be after Rare Ware played around with silicon graphics. It was the first game in the Donkey Kong Franchise to not be directed by Shigeru Miyamoto however he was involved with the games development. 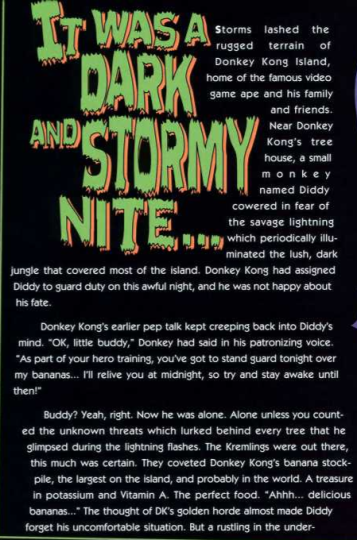 The plot of the game is explained over four pages of the games original manual, the plot is very well written and is a humorous but atmospheric way to get players in the best mood for the game to come, to briefly break the plot down Diddy Kong was guarding Donkey Kongs Banana Horde when he was attacked by a group of King K Rool’s Kremlings before being stuffed into a barrel, the next morning after noticing Diddy’s absence and the lack of Banana’s in his collection Donkey Kong runs into the Jungle to rescue his nephew Diddy and get his Banana’s back. 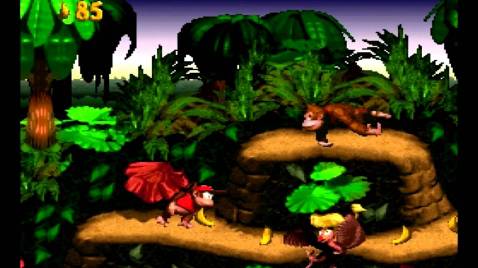 The game is an action plat-former where you play as both of the Monkeys, this also allows 2 player simultaneous game-play. In levels players can collect banana’s and Kong letters to earn more lives. 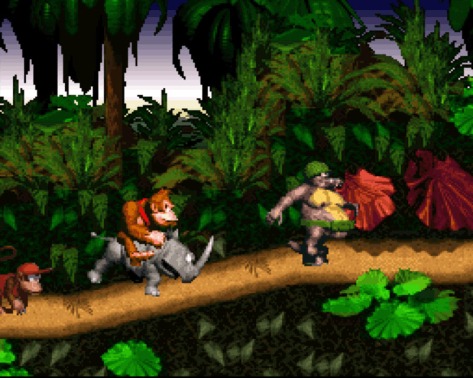 There are various animal friends hidden in some levels which allow the monkeys to easily take out tougher enemies and find secret passages, another use of animals in the game is when you collect three matching golden animal statues,  this will open a bonus area where you can quickly add larger quantities of lives.

The two main monkeys each play the same but have different strengths Diddy Kong is lighter than Donkey Kong and is better at getting through tight spaces, Donkey Kong is much larger and a little slower but his extra weight allows him to take out armoured enemies with ease. 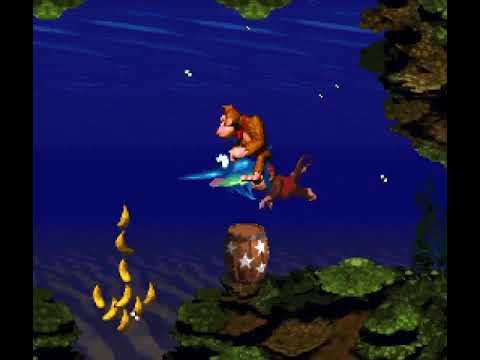 There are many different types of levels in the game and all of them are very well made, the two that stood out the most to me were the water levels and the mine carts. 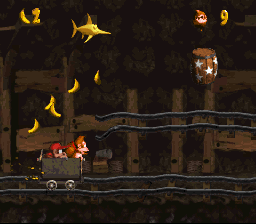 These are in my opinion the most challenging in the game both require quick reactions and well timed movements, I normally hate water levels in games but I really like these ones they have great atmospheric music and they don’t tire out your thumb as much as over games water stages do, if you ride the fish you can actually go through most of these stages without any repetitive tapping as well.

I like the mine cart stages because they give off quite an adrenaline rush due to the high speeds that you travel on the mine cart and the fast reactions you need to survive, these stages leave you feeling very satisfied when you finally manage to beat them.

The only other stages that really stand out in this game are the light stages where you need to keep turning on lights to see your way through the levels, there are only a few of these but they are very difficult. 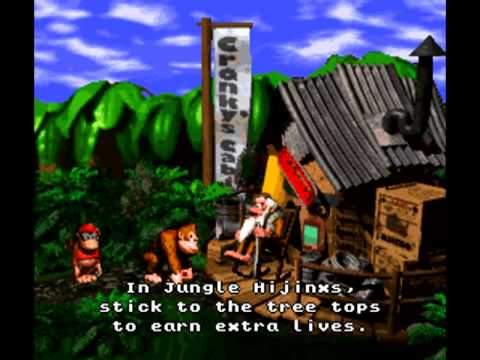 Between worlds you can pay visits to Cranky Kong who will both insult you and also provide you hints on secrets in some of the stages. 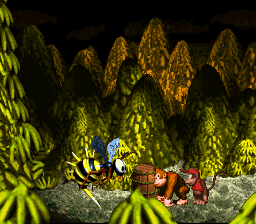 The boss fights are not very inspired, they all get hurt the same way and apart from one or two of them they are not that memorable, this is not including the final boss which is great.

The games soundtrack is one of the most beloved video game soundtracks of all time, the music is extremely well done and fits the tone and atmosphere of the game perfectly. It uses various nature sounds and music styles to make the music fit perfectly into the jungle environment and its hard to give it justice in words alone but composers David Wise and Eveline Fisher made most of the music for the game and deserve their place in video game history.

Donkey Kong Country is an amazing game, it is known to be one of the best games on the Super Nintendo and you can see why, I would argue that it isn’t perfect though one thing that bugged me was that they mapped the roll move with the same button as sprint and this caused me to roll off of edges more times than necessary and I found some areas hard to see properly due to the realism in the visuals. Don’t get me wrong the graphics are really impressive and they suit the game very well I just wish at times they were a little bit brighter, apart from these two things the game is flawless, it controls well, looks and sounds beautiful and is overall one of the best video games of all time 9.4/10