I recommend reading my review of the original Pikmin game before reading this one.

Pikmin 2 was the much anticipated sequel to Pikmin, it was released in 2004 for the Nintendo Gamecube, the game was also re-released on the Nintendo Wii in 2009.

After returning to the Planet Hocotate, Captain Olimar returns to his workplace only to find that it has been hit with serious financial difficulties leaving it to be in debt.

Olimar drops a bottle cap that he brought back from the Pikmin Planet, the bottle cap was meant to be a gift for his son but it instead gets sold at a value of 100 Pokos, the President of the company recognises the value of treasures on the Planet and sends Olimar as well as Louie back to the planet to help wipe out the companies debt.

In the game your main goal is to collect enough hidden treasures to pay off the company debt and after you have done this you must return to the Pikmin planet to collect the remaining treasures in order to unlock the canon ending to the game.

The main gameplay is essentially the same as the first game, you will need to use your Pikmin creatures to destroy enemies and bosses, solve puzzles and collect treaures. However this time you control two Captains which you can swap between to help take on bosses and enemies from different angles or to commit to multiple tasks in a similar time frame, I tend to use Louie as an assistant to Olimar, and tend to allow Louie to take the brunt of most enemies while Olimar kills them.

This game introduces caves to the series, caves are great and are my favourite part of Pikmin 2, they each have a set number of levels each with treasures hidden on each floor, players will have to solve each floors puzzles and try to survive as well as take good care of their Pikmin. You can get major profits if you manage to complete these caves and the best part is that time is frozen in the caves so you do not need to worry about your Pikmin being devoured by the beasts of the night.

You can do more caves which are much more difficult in the challenge mode of the game.

The game does not have a time limit like the first one does so exploration and taking your time makes the adventure much more enjoyable and relaxed in my opinion. 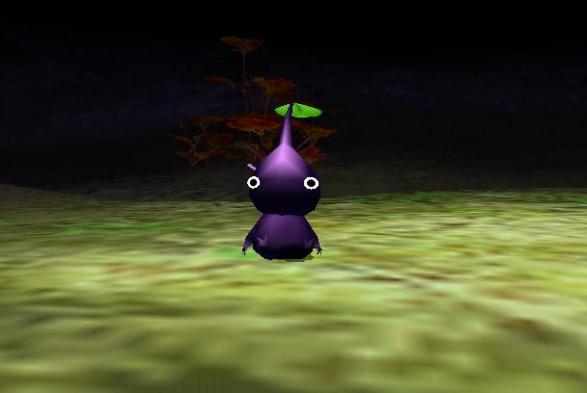 The game introduces two new Pikmin types the first is purple Pikmin, these guys each have the strength of 10 Pikmin’s, they are very useful for carrying heavy items and taking out stronger enemies but they are slower than the other types.

The white Pikmin’s are creepy looking with their red eyes, these guys are very fast, can dig up buried treasures and are also poisonous so they cannot be affected by poison and if an enemy eats them they can do some major damage.

It should also be noted that the yellow Pikmin can no longer carry bombs like they could in the first game and here they are instead invulnerable to electricity.

The boss fights are very creative and in my opinion are better here than they were in first game, you tend to fight them at the end of caves and they are really tough, you need study the boss patterns before taking Pikmin into the fight this will help you to decide what Pikmin you will need and the best way to win with minimal Pikmin loss.

The graphics here are a little better and I think because of how many Pikmin the game allows on screen at one time, I feel that an increase of graphical capabilities would most likely cause lag so I do not really see this as a problem.

I really enjoy the soundtrack to Pikmin 2 but something about it feels a little lacking and not quite as enjoyable as the original games soundtrack, I don’t feel like a lot of these tracks do not suit the areas that they play in either but overall its still nice to listen too.

Pikmin 2 is a fantastic game, it is so much fun to play through and is extremely satisfying when you collect the treasures. The plot is hilarious and the messages that you get from your boss throughout the game are really funny. The lack of a time limit makes the game more enjoyable as you don’t feel like you have to rush through it and even while its soundtrack was not the best, everything else about the game is charming and wonderful. If you find the original game too hard or frustrating there is no harm in skipping to this one for a challenging but in my opinion much fairer experience.

I hope you enjoyed this review of Pikmin 2

Pikmin is the first of Nintendo’s cute but rather dramatic strategy adventure series, as much as I do love the Pikmin series, I have only really introduced myself to the games over the past couple of years.

The plot is fairly simple here but it works really well for a game such as Pikmin. In the game you play as Captain Olimar a small alien creature who crash lands on an unnamed planet. The captains ship the S.S. Dolphin has separated into 30 parts which have spread to various areas of the planet, the captain needs to find at least 25 out of the 30 parts within 30 days otherwise he will die due to a lack of oxygen on the planet, however the captain is in luck as small plant like creatures called Pikmin are more than happy to help the captain on his mission. 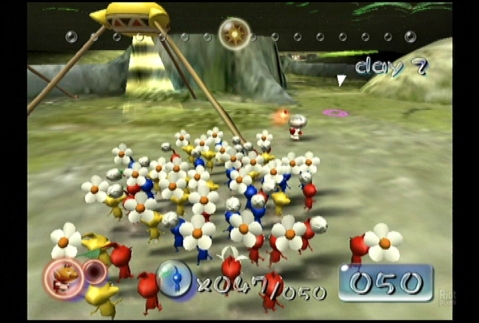 The idea of the game is to use the Pikmin that you collect in order to carry the scattered parts back to the S.S. Dolphin, there are three types of Pikmin in the game, the Red Pikmin are invulnerable to fire damage, the Yellow Pikmin can be thrown higher and can also pick up bombs to throw and finally the blue Pikmin can breathe underwater.

There is one way to get more Pikmin in the game once you have discovered an onion (a Pikmin Nest), If you defeat an enemy or collect nectar from plants you can bring your spoils to one of the coloured onions in order to release more seeds which will grow more of the chosen type of Pikmin.

As previously mentioned you can use Pikmin in order to attack enemies, there are many ways to do this it can be done by simply throwing your Pikmin onto an enemy or by using an army of Pikmin in order to surround an enemy giving it no chance of survival. Strategy will need to be used through out the game in order to collect the ship parts however strategy should be used when fighting enemies as well so that you are well prepared for the dangers ahead and not to mention that you will most likely have a lot of of your Pikmin die in some situations.

The boss fights are all very creative and can also be very difficult for new players, however practice makes perfect for a lot of these and the game can be reloaded without you losing a day if you want to try out different ideas. I love all of the bosses in the game but if I was to choose three apart from the final boss I would say that the Burrowing Snarglax a bird creature that hides itself underground is my favourite, followed closely by Beady Long Legs, a large spider creature (pictured above) and the PuffStool a Mushroom boss that releases a gas which turns your Pikmin against you.

I wouldn’t say that the graphics have aged well since the game first came out however back in the day they were quite impressive, you have to keep in mind that this was one of the first games to be released on the GameCube, the visuals definitely improved in the later games however they are still nice here.

The Soundtrack is again very simple here but it really works, a lot of it is small tracks which are looped but while small and catchy some of the music is beautiful, listen to Distant Spring and tell me that isn’t beautiful music.

Pikmin is a good game I personally would not say its a masterpiece by any means as the series does improve a lot as more games are coming out.

Pikmin is a charming game that managed to grow a loving fan base, I really enjoy this game and the only real issue I have with it is the time limit, I really do no enjoy games which give players a short amount of time to finish them and because Pikmin is a game that requires a little bit of grinding now and again in order to re stock on Pikmin due to this the time limit can become quite stressful, you could look at it as adding an additional challenge to the game and I am sure that is how most people see this element of the game.

Pikmin is a short but very fun game, it has tight controls, a short but beautiful soundtrack and an interesting premise however a short time limit takes away from the experience for me. 7.4/10