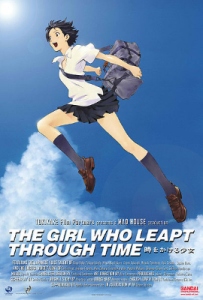 Makoto Konno is an ordinary teenager, she goes to high school, hates her little sister, her emotions are all over the place and she loves hanging out with her two best friends Chiaki and Kosuke 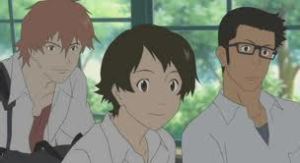 Apart from the fact that Makoto is extremely clumsy and a bit of goof ball her life is fairly normal for a girl of her age, but that all changes when she is asked to return some books too one of classrooms in her school, when she arrives the class room appears to be completely empty, she discovers a message on the blackboard which reads “Time waits for no one”

She thinks nothing of this and she returns the books to their proper place but being the klutz she is, she falls on a walnut and crushes it. On her way home she is racing down a steep hill on her bike, she hears a railroad crossing ahead as it is bleeping warning pedestrians of  an incoming train, Makoto tries to use the brakes but they wont work, she hits the rail and flies off her bike straight into the oncoming train and presumably dies.

A few Seconds later she is back on top of the hill and is in pain after falling off her bike and she hears the rail road crossing warn passers by of the same train that hit her previously.

She Explains to Makoto that she had peformed a time leap which means that she leapt through time and time traveled. We also learn that time leaps can be peformed by a lot of teenagers her age, but not many know that they have this ability.

As you may expect like any person who discovers that they can time travel Makoso starts time leaping whenever she can, she starts time leaping to get what she wants, to change how she deals with situations because if she does screw up anything she can reverse time and start again, she even time leaps so she can keep redoing her maths test until she has a perfect grade.

Makoso starts to get very selfish knowing that she can now have multiple chances at any thing that life throws at her and that nothing in her life will ever go wrong again.

At least that’s what she thought because later on in the movie Makoso notices a Tattoo of the number 9 on her arm, at first she thinks nothing of it and she carry’s on time leaping only to realise that the 9  is now a 6, this number represents the amount of time leaps Makoso has left,.

Makoso starts to feel foolish that she wasted almost of all of her time leaps and with only one left she decides that would be a great idea to time leap back to the begging of the movie so that she can get her friend Kosuke in a relationship with a girl who has a crush on him, but by doing this she ends up managing to sprain the girls ankle, since Makoso just walked away not realising what had happened Kosuke borrows Makoso’s bike and starts rushing to his house to get the girls ankle fixed but little does he know that he is heading towards the same train from the beginning of the movie.

Makoso Realises this and with no time leaps left she runs to try and stop her friend before it is too late.

The films plot is very impressive considering that a lot of anime’s are full of action, have an antagonist of some sort and are genuinely un-realistic, but with this anime its not the case at all because these teenagers act like normal teenagers, the high school looks and feels like a normal high school and even when Makoso starts time leaping she uses her new ability for non important things such as redoing karaoke over and over again, going back in time so she can eat her meals for a second time and to just genuinely avoid awkward situations, the reason I bring this up is because when I was a teenager if I this ability I would be using it in a similar manner.

The icing on the cake is the animation, this movie is beautiful every scene is hand drawn and its amazing. What may surprise a lot of people is that the animation and designs of the characters are quite simple but the backgrounds have had so much effort and time put into them that they really stand out, I don’t see this as a bad thing because its actually quite a nice change of pace considering that with most animated films and animes its the characters them selves which stand out the most compared the the rest of the imagery the film has offer, this film is a complete reversal of the usual formula and it works really well because it allows the viewer to really soak in the animation and ultimately 9 times out of ten they will appreciate the animation a lot more as well as the time and effort that went into making the film.

The girl who leapt through time is an amazing film it has top notch animation, a wonderful cast of characters, a brilliant plot and writing and it some heart warming and heart breaking moments which are bound to bring out some emotions in any who watches it.

If you haven’t yet seen this movie, I highly recommend giving it a watch

I hope you enjoyed this review

If you repect my opinion, I will respect yours