With his never ending smiles and insane levels of adorableness Kirby has always been an extremely lovable video game character, so when people heard that Kirby was going to be made out of yarn in his 2010 Wii game meaning extreme levels of cuteness people couldn’t resist picking it up, I also couldn’t resist grabbing a copy but I would be lying if I said I wasn’t at least a little concerned with the new visual style.

So was everyone’s favourite pink puff ball just as lovable as a pink fluff ball?

One day in the magical world of Dream Land Kirby is super hungry and is looking for some food to eat and he eventually comes across his favourite snack a metamato, this particular metamato looks very unusual and unlike anything Kirby has ever seen but Kirby is so hungry that he eats it anyway, this metamato belonged to Yin Yarn the sorcerer and after eating it Kirby is banished to another world called Patch Land, here he meets Prince Fluff who explains that Yin Yarn has taken over Patch Land and has hidden the seven pieces of magical yarn that hold Patch Land together, Prince Fluff asks for Kirby’s help and they both travel across Patch Land looking for the seven pieces of magical yarn.

Kirby’s Epic Yarn is a 2d plat-former but it has a very different feel to most Kirby games this is because Kirby cannot eat things to steal their powers and he cant even fly, this is due to him now being made of yarn so he has lost most of his original abilities but he has gained many more in their place. 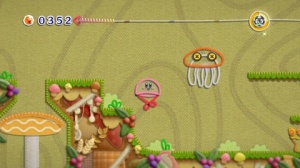 With his new light and flexible body Kirby is able to transform into small objects and vehicles when he is in certain situations or when he genuinely feels the need to do so, for example this game does not have a running function but Kirby is able to transform himself into a car giving him twice as much speed , another cool transformation is that when Kirby goes underwater he transforms his body in a submarine using his feet as the propellers to help him keep a steady pace under the water and finally another one of my favourite transformations is that he can transform his body into a parachute when he is falling from great heights and this helps him to reach some of the more difficult platforms as well as too help him find hidden treasures and collectables.

There are also many different opportunities for Kirby to transform into some bigger and more complicate transformations, he can only transform into these other forms if he finds a magic warp circle, these circles of yarn can only be found in certain parts of the game but its worth the wait to find these because the results are really awesome.

My favourite three special transformations are

After using the Spin Board transformation Kirby turns into what seems to be a penguin riding a hover craft, this transformation is super fun as its usually used in levels which consist of down hill slopes and fast rushing water, Kirby keeps at a fairly quick speed but he can also jump on enemies which causes him to spin in mid air this tactic is useful as Kirby can bounce off of enemies to reach higher platforms.

Being a big fan of the Ecco the Dolphin games on Sega Genesis really helped me get super excited when I discovered a Dolphin transformation in this game, as a Dolphin Kirby can swim quickly and easily through strong under water currents and he can even dash into enemies to defeat them, I love this ability because its really cool and it controls extremely well even though we are only playing using the Wii Remotes D-Pad.

Kirby can use all sorts of different abilities while on his adventure through Patch Land but in my opinion its not the abilities that make this game stand out but its the artistic visuals that really make game very special, I have not played a video game that has been this creative in a very long time, everything in the game is made of yarn and other fabrics, its really rather beautiful and its a good reason to take your time to explore every stage from top to bottom because you just never know what creative things you may find.

The amount of detail in the game is also quite amazing, almost everything in this game is sewn into the level in some way or form and you can actually see the stitching, the amount of detail in the game also helps to really enhance the game play as some times you will find loose pieces of string or zippers that you can pull to uncover secret areas, you can remove some objects from levels completely by peeling them away as if they are stickers and another really cool ability is that you can unravel your enemy by turning them into balls of yarn and you can then throw them back at other enemies that are in your way. 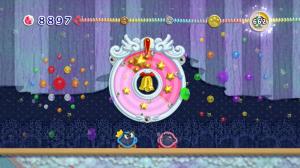 A lot of people complain that the game is much too easy with no challenge at all, I do agree that it is very easy but saying that there is no challenge does not seem fair to me, the game itself is fairly simple and you wont have any trouble getting through the game as Kirby cannot die, each stage has you collecting beads and depending on how many beads you have collected will determine what medal you will receive at the end of each level,  no matter how many beads you collect you will always get a wooden medal but in order to receive a bronze, silver or gold medal you will need to collect various amounts of beads, this may seem simple but be careful because every time Kirby  falls out of the stage or if he gets damaged he will lose beads and will need to look for some more.

Another challenging aspect to this game is the challenge modes, through out the game Kirby is able to help the manager of a block of flats build different rooms to inspire new residents to rent the flats off of him, these residents soon become Kirby’s friend and they each have a different game for Kirby to play, whether that’s playing hide and seek, collecting a certain amount of beads within a time limit, carrying some one through a level, killing a set number of enemies or beating someone in a race throughout various stages the challenge modes have a lot to offer and near the end of the game they start to get a really tough.

Don’t worry Kirby also has his own flat which you can decorate to your hearts desire, you decorate your apartment with the various collectable items that you find in each of the stages and you can also buy some of them from the store, you can also change the wall paper in your apartment and again you need to collect these, you collect the wallpaper by completing the challenge modes and again you can buy some of the wallpapers from the store.

Each world is themed and has a set amount of levels for you to complete before you can take on the worlds boss, the boss fights are fairly simple and quite easy to learn but again there is a challenge for you complete, you will notice that as well as the usual medal system the boss fights also offer a prize higher than a gold medal, this prize is a patch and if you manage to collect enough beads to earn the patch you will be presented with two new secret levels that you can complete.

The entire game is based on collecting things which is why the game is not too difficult, the developers want the player to explore each level taking as much time as they want, pulling every piece of string, unzipping every zip, peeling off every sticker and genuinely exploring this incredible fabric covered world and in my opinion that’s fantastic game design, the only complaint I have regarding the game play is that you don’t get anything for 100 percent completion of the game which really sucks considering the game tries to push you too fully complete it.

Just like the rest of the game the music is rather relaxing and it really suits the atmosphere of each world, for example in the snow world the music is cheerful and sounds like Christmas, in the cake world the music is a bit more up beat and fast but you can still tell its having fun its almost has the vibe of a child on a sugar rush, in the cave levels the music is slower and more dark but it also has an adventurous feel to it, the music is just another aspect to this game which really helps it to stand out from the crowd.

Kirby’s Epic Yarn is an amazing game and a wonderful experience, with its mind blowing visuals, very memorable sound track, extremely responsive controls, fantastic game play which can be played both alone or with a friend, creative characters and story line and its incredible game design which is only held back by having no completion bonus, Kirby’s Epic Yarn is an artistic masterpiece and its not only one of the best Wii games but also one of the greatest and most inspirational games of all time.