Universal Studios !! this will be fun …….right?

Universal Studios Theme Park Adventure was a Nintendo GameCube exclusive, it was developed by Nai’a Digital Works and Published by Kemco.

The game is at its core a mini game collection with an extremely basic theme park setting to help separate the various challenges.

In the theme park there is only one challenge and that is to collect all of the letters that spell Universal Studios, this can be done throughout your exploration of the park. 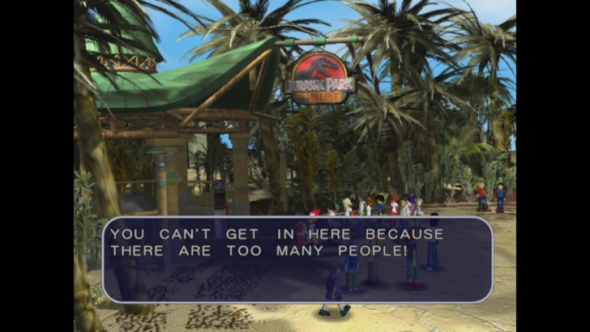 Before you are able to enter any of the attractions you must first gather a set number points to buy the hat that matches the attraction, you can do this by either picking up rubbish and putting it in the bin or by shaking hands with various costumed characters you will then need to purchase the hat from Woody Woodpecker at the park entrance.

The only attraction that needs no points to enter is the quiz, Its a quite a hard quiz especially if you don’t know many Universal Studios movies.

In E.T you must cycle E.T to the spaceship before the timer runs out, not a lot in this one just a few ramps to go over and obstacles to avoid.

In the Wild Wild West you must shoot targets to gain more points than your opponent over three rounds. Its ok but the cursor is difficult to aim.

In Jaws you must throw barrels and boxes at the shark before its sinks your boat, this one is a little more fun but bad controls make it difficult to hit the shark.

Back to the future is by far the best mini game however it still is not any thing to write home about, Biff steals the Dolorian, you then while driving another Dolorian have to ram into him until his health bar depletes. 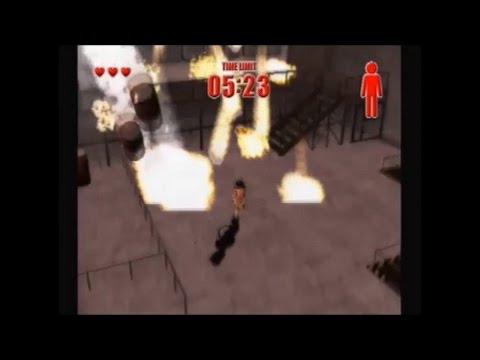 In Back Draft you must extinguish multiple fires and rescue civilians who are trapped inside of a burning building. I had more fun with this than some of the other games and while it is difficult its not unfair. 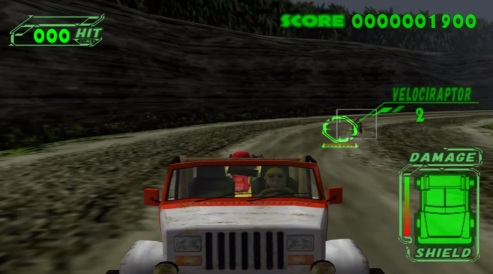 Finally in Jurassic Park you must kill hundreds of Dinosaurs with a Machine gun in an on rails shooter style game. The Dinosaurs are hard to hit most of the time and the mini game is far too long.

When you complete a challenge in the game you are awarded with a stamp and if you collect all of the stamps you must speak to Woody Woodpecker again in order to finish the game.

The game play is not fun at all, in the mini-games bad controls make them difficult to finish and during park exploration, the pix-elated graphics that look worse than Nintendo 64 and a completely still camera which does not follow the player make the game almost unbearable and not a pleasant experience.

The soundtrack is good and although I couldn’t find it anywhere to add here, all of the music is reminiscent of the movies that the mini games are based on so I find it difficult to complain about.

A good soundtrack does not make up for a lazy cash grab of a game, this game had no love put into it, the developers took some of the greatest movies of all time and made the most basic mini-games thus making a mockery of those popular properties and franchises. The game is even worse in the Theme Park as you will struggle to know which way to go even with the in-game map. Picking up rubbish and putting it in a bin is a huge insult to any gamer, no one no matter what age they are wants to do this in a video game especially in the boring way that is presented here. Universal Studios Theme Park Adventure is a disgusting excuse for a video game and it should be forgotten by everyone who plays it and if you haven’t then I advise you find something different to play.

Shadow the Hedgehog is one of the most hated games in the entire Sonic franchise, almost everyone I spoke to told me to avoid it like the plague, but very few people said that the game was a fun experience and that they think the game is underrated, so I had no idea what to expect when playing this game, a Sonic game with guns? This is either going to be awesome or its going to be extremely stupid. Now that I have played through the entire game I am ready to share my opinion with all of you in the style of a review. Could it really be that bad?

There are 22 levels in Shadow the Hedgehog Unlike traditional 3D Sonic games which have individual character stories, Shadow the Hedgehog uses a path system allowing the player to create their own story. Depending on what path you take you will either end up being a Hero or a villain at end of the game.

During one play through of the story mode, the player will play six stages depending on whether they do the dark or hero mission on stage six they will have to fight one of two final boss fights for the path they are on, earning the player one of ten endings.

The path system could have worked out really well if Sega didn’t mess it up, the problem with the path system and my biggest issue with game is that in order to unlock the final story you need to get each ending, which means playing through the majority of stages a number of times and yes you need to beat the game TEN TIMES!!!!. I didn’t mind the first few runs of the game but after a while I got sick of seeing the same stages over and over again especially Westopolis because with it being stage one I had to play this stage during every single play through of the game.

On a lighter note the game controls were perfect I didn’t have a problem with game once even when Shadow was moving really fast I was still able to have really smooth control over him, this is something that I don’t often find in 3D sonic games so it was nice to play a game that when I died it was my fault and not game glitches or bad controls.

For some reason Sega thought that giving Shadow the ability to use guns to kill his enemies would help the game appeal to the older demographic, but it just looks really silly and ridiculous, seriously no one wants to run around shooting aliens with an AK-47 in a Sonic the Hedgehog game. As silly as the guns are, they are not my issue with this gameplay style, the problem is that the game auto aims once Shadow gets close enough to an enemy which is great but it becomes an issue when you get surronded by enemies and you cant shoot them all usually resulting in your death. If Sega gave the player the ability to aim they could take out enemies using clever strategy and skill and in my opinion the use of guns would have been a lot more constructive and would work a lot better to the players advantage.

Shadow the hedgehog does have a pretty good sound track, it does lack in vocal tracks but some of the level themes are really catchy, my personal favourite level theme is Circus Park.

Never turn back by Crush 40

So we have determined that the game has good controls, an ok path system that gets repetative and boring after the first few play throughs,terrible gun mechanics and for the most part a pretty kickass sound track but how does it look? 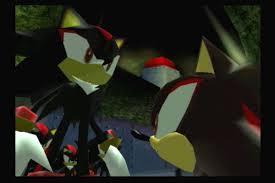 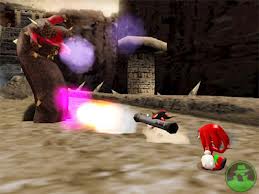 Wow this game is ugly, from looking at the pictures you wouldnt think that Shadow the Hedgehog was a PS2, Gamecube and Xbox game, The graphics are flat and blocky, the colours are ugly and bland, when characters talk the lips dont sync to what they are saying, the voice acting is cringeworthy, the enemy and level designs are very basic and not very interesting to look at and I am not kidding but I have played Dreamcast and ps1 games that look better.

Shadow the Hedgehog was an ok game, it had really good controls for a 3D Sonic game and a really enjoyable Soundtrack but it fell short due to its bad game design, ugly graphics, and a lame path system which makes you beat the game ten times just to unlock the Final Story. The Final Story has Shadow saving the world in the end of the game and this essentially means that creating your own path was a waste of time making the entire game completely pointless. Shadow the Hedgehog had things going for it, but it wasnt enough to make it a good game

I hope you enjoyed this review

If you repect my opinion I will respect yours