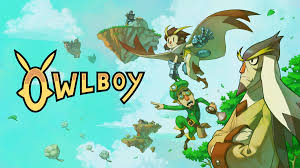 Owlboy is an independent game created by D-Pad Studios, the game began development back in 2007 however it would not see a release until November of 2016 a full nine years later. 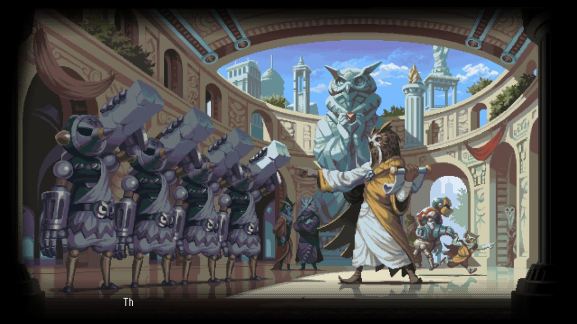 You play the game as an owl called Otus who lives on an island in the sky, the islands of the earth have all floated into the atmosphere due to the unfortunate result of an event explained later on in the game, one day the floating islands are attacked by Pirates who are looking for three mysterious relics, its up to Otus and some friends he meets on his adventure to find the relics and stop the pirates from causing havoc. 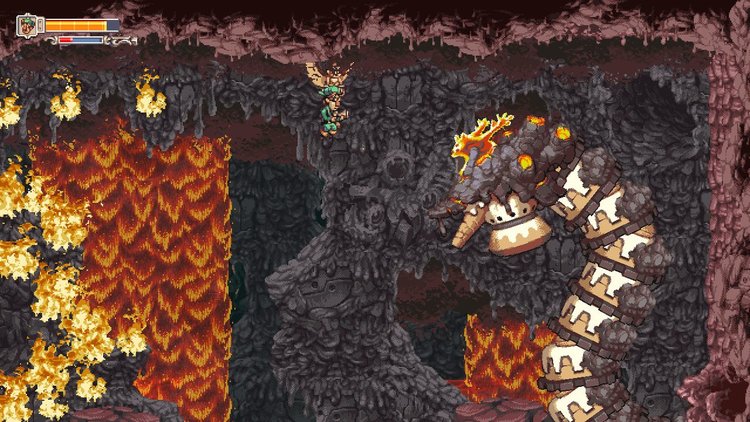 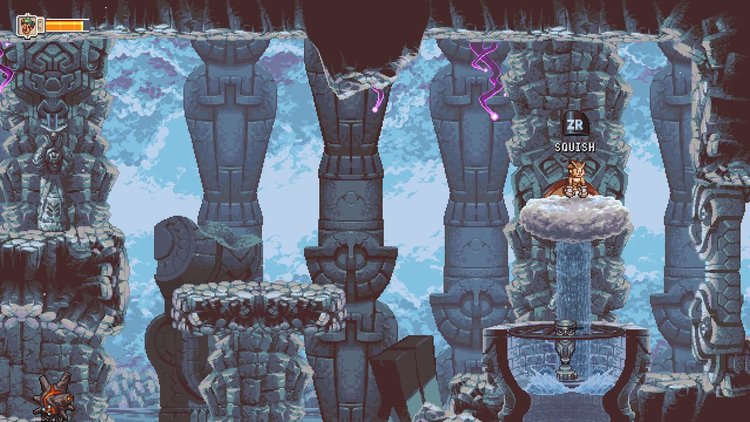 Owlboy is a 2D platformer at heart but it has a lot of different elements which help to make the game stand out amongst others of its kind, the main methods of attack are spider webs, fire and guns, Otus can only use these attacks by carrying his allies in his claws while flying, the gun weapon is best used for defeating enemies, the fire is handy for destroying plant life and the shotgun attack which comes with it is great for destroying tough barricades, finally the web attack is great for taking out flying enemies and it can also grapple onto some surfaces and items. Along side these attacks Otus can fly and spin into enemies to deal small amounts of damage.

Puzzles are also a large part of the game, the majority involve having to find switches to open doors or having to get from one area to another in a given amount of time, my favourite puzzle was when you had to squeeze the water out of clouds in order to bring items to the surface. 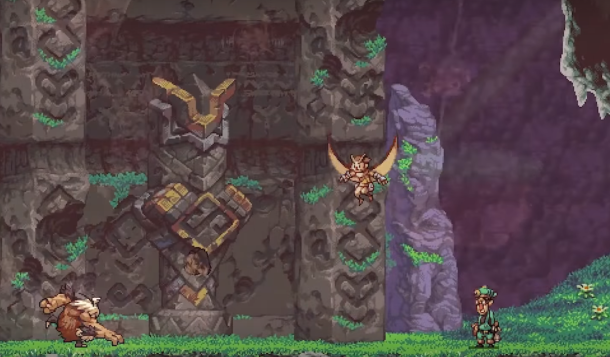 The Visuals are really great in this game, the graphics look gorgeous they have a basic 2d look and they remind me some what of the super nintendo however the visuals here are much better which is to be expected, the animations are smooth and the entire game plays with no lag or frame rate issues.

Owlboys Soundtrack is fantastic it was created by a gentleman called Jonathan Geer who has a very impressive history of creating soundtracks for smaller gaming projects, Owlboy isn’t one of my favourite soundtracks of all time but I would say its worth purchasing instead of just listening to it over youtube 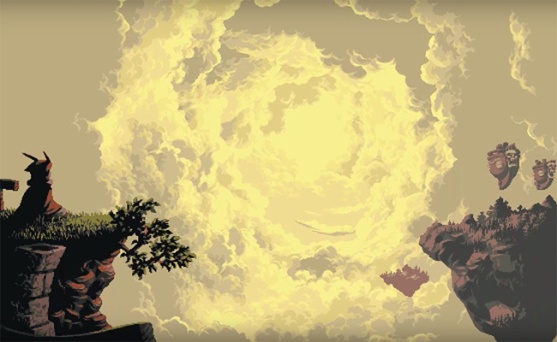 Owlboy is an amazing game however I do have one issue, as much fun as the game is its very short, I beat the game in around 9 hours which didnt impress me considering it costs around 20 pounds if it was just a little longer this wouldn’t have bothered me so much.

Even though it is a little bit short Owl Boy is one of the best indie games I have ever played and it is well worth the money regardless of its length, it has a great plot,beautiful graphics, a really nice soundtrack, lovable characters and even a little bit of replay value with collecting coins and buying everything in the shop, its a fantastic experience and I hope for a sequel in the near future 9.8/10

I hope you enjoyed this review Of Owl Boy for the PC, PS4, Xbox One and Nintendo Switch 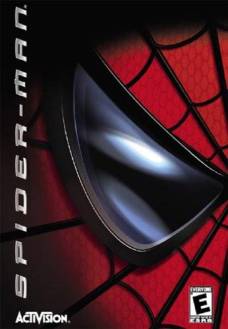 In the past four years of writing reviews for this website I haven’t really delved into the world of super heroes, we’ve all seen the movies but what about the video games that came after them?, I haven’t really played many super hero games but after Sam Raimi released the first Spider Man film I remember begging my parents to buy me the game that Christmas, I recently repurchased the game for nostalgia but was it as good as I remember? 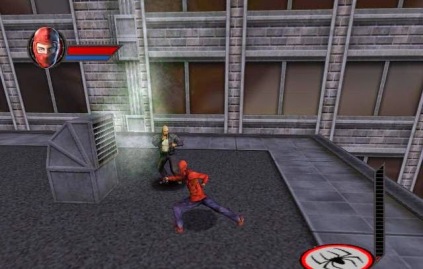 The first thing that stands out with this game is that it doesn’t have much in common with the movie at all, the first stage of the game actually takes place long after Peter is bitten by the spider as its his mission to track down Uncle Ben’s killer. 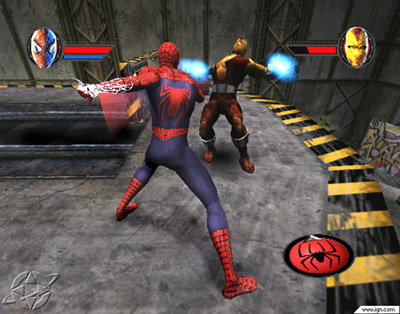 The rest of the game has a unique story line, Spider Man ends up taking on all of sorts of super villains including The Shocker, The Vulture, Scorpion and Kraven the Hunter (Kraven is only in the XBOX version of the game), of course the Green Goblin is still the main antagonist in the game but apart from one level every time you fight him its different to the movie, even the final battle doesn’t take place where it does in the film, I personally really like that the game is so unique but some people may be a little put off by its differences. 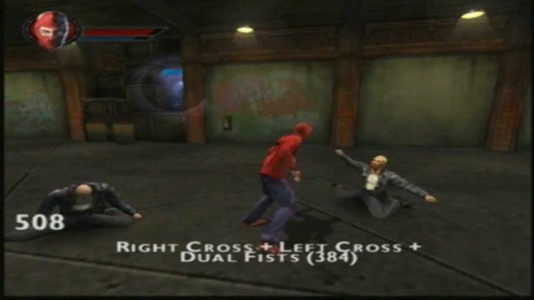 Spider Man is a general beat em up game and it consists of 24 stages, most of the game is boss fights which are all really fun, some stages require Spider Man to hide in the shadows and sneak about but most of time you will be beating up bad guys and trying to complete a goal to finish the stage, Peter doesn’t just fight with punches and kicks as he can also use different fighting techniques by using his web, there are a lot of moves you can unlock but for me the most useful was shooting my web at enemies while I was swinging through the air, other useful moves include tying up bad guys with your web, pulling enemies towards you by lassoing them with your web and creating an exploding shield around your body, you do have to be careful though as you can run out of web and it can only be topped up if you find a blue spider, you can also top up your health by finding red spiders and you can unlock new fighting moves by finding gold spiders. 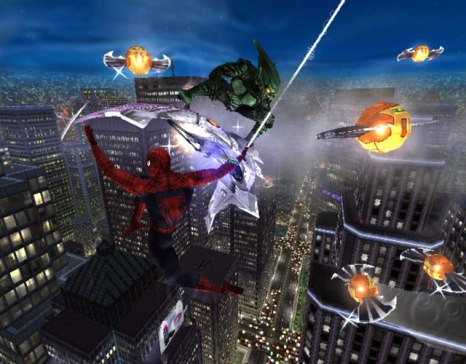 The biggest problem I have with this game is that when you are outside you cant land on the street otherwise you will die, its kinda annoying because in the movie Spider Man is able to walk about in the street so why cant he here, it doesn’t make any sense what so ever.

The game controls pretty well when you are stable or fighting, I found the controls to be tight and responsive but when I was swinging I had a lot of trouble trying to make Spider Man go in the direction I wanted him too go, he just kept bumping into the sides of buildings and due to the way the game is designed sometimes he would grab onto a building when I bumped into it, this slowed me down and was a particular pain on levels where I had to chase the villains.

Graphically for a game that came out in 2002 it looks fairly impressive, I was very surprised with how smooth the animation was when I was playing the game, for some reason the cut scenes look quite pixelated which really sucks considering how great the game play looks.

I don’t remember any music in this game at all which isn’t a good sign because that means that it blatantly wasn’t that good and I cant really comment on it because like I said none of it was memorable to me. 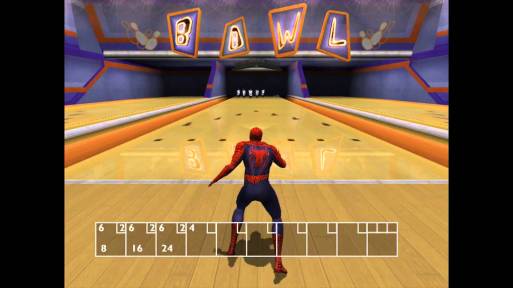 Through out the game you will gain points depending on your performance, these points will unlock loads of really cool secrets, the best in my opinion is pin head bowling where you can team up with a friend and can swing into bad guys to get points, other unlockables include secret cut scenes, being able to change Spider Man’s model so you can play as Mary Jane, a Police Officer, Peter Parker etc, you can unlock the ability to play a Green Goblin campaign if you beat the game on the Hero or Super Hero difficulty, this campaign is almost exactly the same as the main game and I recommend skipping it.

Spider Man is a pretty fun licensed game, it’s not perfect by any means but it definitely stands out with its unique story and different game play styles, it’s really cheap to pick up these days and if you ever come across it I recommend picking it up especially if your a Spidey fan.