Super Mario Bros 2 is a really strange game, to be honest the version of the game released outside of Japan isn’t even the real version of the game, the original sequel was deemed to difficult for both the Americans and the Europeans, so instead of giving us the game that was similar to the first Super Mario Bros Nintendo decided that they would reskin a game called Doki Doki Panic to now involve Mario character for release outside of Japan and the rest is history.

The first thing players noticed in this game was the character select screen,  now not only can you play as Mario and Luigi but you can also play as a Toad or Princess Peach.

Each character has unique characteristics.

Mario is a great all round character with good strength, jump height and speed, Luigi is a little weaker and slower than Mario but has the best Jump height in the game, Toad has the best strength and speed in the game but is not very good at jumping  and finally the Princess has low strength and speed along with a mediocre jump however she can float in the air which makes up for her lower stats, the Princess is my favourite character to play as.

Due to this being a reskin of another game Mario 2 changes the way you play the game compared to other titles in the series, now you cant jump on enemies to kill them instead you need to pull up vegetables, blocks or enemies and hurl them at the bad guys. 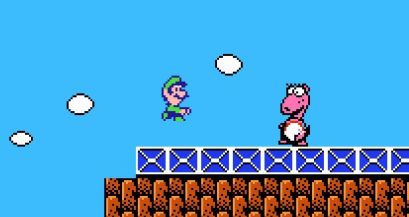 At the end of each stage you now have to fight a sub boss, some of these are really fun to fight and some will catch you off guard such as the exit door which comes to life and tries to defeat you although most of these sub bosses are Birdos who appear in almost every stage.

At the end of each stage you will have a chance to use a slot machine to win 1-ups, you can only use coins found in levels on the slots machine, you find these coins in bonus doors that you can open when you find a magic potion and throw it on the ground. 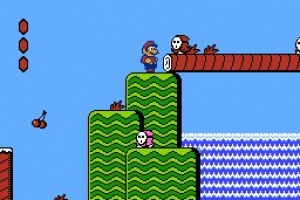 Visually this is the best looking Mario game on the Nintendo Entertainment System, while all of Mario’s NES era games have smooth graphics with great animations Mario 2 definitely has the most interesting enemy and world designs, this is mostly due to the game taking place in a brand new area with different and unusual landscapes.

The soundtrack is definitely better than the first Mario game although its still lacking in tracks and often loops the same music.

Super Mario Bros 2 is a pretty good game, I wouldn’t say its one of the best games in the series although it is still worth giving it a go if you get the chance, it controls great, has fantastic visuals and a brand new story and location however in my opinion the soundtrack and slow game play holds it back a bit, as I previously stated this is only a reskin of Doki Doki Panic with not many changes at all so consider this a review of both games and due to this I would personally recommend you play one over the other Mario 2 is slightly more polished and a little easier so I would choose that one although if you want the intended experience play Doki Doki Panic, either way no matter which version you choose they are both fun games which I can happily give a fair 7.4/10

Click the following Link to be directed to my review of Super Mario Bros for the NES https://ragglefragglereviews.com/2012/11/22/super-mario-bros-nes-review/

Click the following Link to be directed to my review of Super Mario Bros 3 for the NES https://ragglefragglereviews.com/2012/09/13/super-mario-bros-3-nes-review/