I was flicking through my video game collection a few days ago and I came across a very nostalgic game from my childhood Super Mario Bros on the NES, now I gather everyone has heard of this game or has at least played it, Super Mario Bros was one of the very first NES released and is a beloved game among many fans but is it all it’s cracked up to be let’s find out in this review of Super Mario Bros. (Just to prewarn you this review will most likely be shorter than the others as the game is pretty basic in all aspects)

In the game you take control of Mario an overweight Italian plumber who likes nothing more than taking magic mushrooms and eating plat life to gain powers (No he is not on drugs……….Or is he?) any way Mario has heard some tragic news and found out that the girl he has his heart set out for Princess Toadstool has been kidnapped by an evil turtle known as King Koopa (Bowser) Mario must adventure across the Mushroom Kingdom (ok what’s with all the mushroom quotes?) in search of the missing Princess and her kidnapper.

There are three types of levels in the game the usual outdoor/ underground plat former levels, underwater swimming levels and Bowser’s many castles in the game, The game looks and plays great it has a nice colour palette for a game that came out in 1985 and Mario’s controls are tight and easy to learn, Mario moves and attacks in different ways depending on the level you are on and if you have found an item.

The music in this game is great, It is both really fun to listen to and really easy to remember, one problem there is a total of 32 levels in this game but Nintendo only gave us three songs to listen to, these songs are great the only problem is that listening to the same music over and over again can get really annoying apart from that the music is awesome

I guess you could say that there are 8 bosses in the game but does it really count if all the bosses are pretty much the same apart from little changes like a platform Mario can jump on or the fact that in the later levels Bowser will throw axes and for that reason alone I am not going to go into detail of each boss because you would just read the same thing over and over again, If you have fire power shoot him until he dies, if not jump over him or run under him and hit the Axe to chop down the bridge. I love Nintendo I understand that this is one of their first really popular games but could they really have not been more creative especially with the in game bosses (How about an explanation to how Bowser seems to survive every time I throw him into lava because I’m pretty sure he would die). 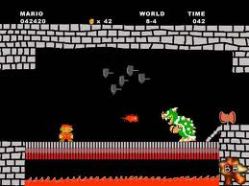 Now I know I’ve done a little bit of bitching about this game but I’m not gonna lie even though I find these issues I still love it, It is one of those many video game titles which will live in my heart forever, I’m not going to tell you to buy the game because chances are you already own it whether it’s on the NES, DS, PC or anything else Super Mario Bros is a great game and it has my seal of improvement 8/10.  I hope you enjoyed this review of Super Mario Bros on the NES this is my opinion of the game if you respect my opinion I will respect yours.

Thanks for Reading this Raggle Fraggle Review

This review was written by Dan