I remember playing Harry Potter video games when I was a child, I used to own the Philosophers Stone on the Ps1 and both the Chamber of Secrets and Prisoner of Azkaban games on the PS2.

There are many Philosophers Stone games and the most rare of them all is the second generation version (Ps2, Xbox and GameCube) due to the price of this game being rather ridiculous I refused to buy it until I could find it for cheap in a flee market or a charity shop so when I saw the PC version being sold for penny’s in my local charity shop I quickly snapped it up expecting to be playing the rare second generation version only to be surprised that this particular game was very unique in itself and actually provided a completely new experience I didn’t expect.

The only question now is was that experience good?

You play the game as the Young wizard Harry Potter who has just started his first year at Hogwarts school of Witchcraft and Wizardry, you spend the majority of the game attending classes such as Defense against the Dark Arts, Broomstick flying and Charms.

When you attend a class you are almost immediately told to trace over a shape using your mouse, you will need to hit a certain percentage of the shape in order to proceed to next difficulty of the spell learning minigame, you are required to pass level 1 which will award you five points for Gryffindor and after you succeed you will be taken to the next level, the more levels you pass the more points you will earn for Gryffindor but you are only required to finish level 1 in order too continue with the main game. 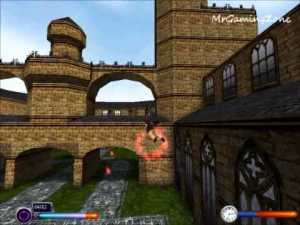 The only time that attending a class is any different is when you take part in a flying lesson because instead of tracing shapes this time you will need to fly through many different rings, this section works surprisingly well using the keyboards controls considering that for most of the lesson you will be using the speed up key which makes your broom stick fly much faster than usual.

After you finish the tracing mini game you are always then told to complete a bunch of challenges which mostly rely on you using that new spell, you will often be taken into a number of rooms to perform these challenges, you will also have the opportunity to collect the challenge stars which depending on how many you can find will award you with different amounts of points for Gryffindor once the challenge is complete, these stars are really easy to find so you should almost always be awarded maximum points for completing these challenges.

When playing through the main game you will also have the opportunity to collect other items, one of these items is the Bertie Botts every flavor beans which are only needed for you to give to Fred and George Weasley  as they need it for a top secret practical joke they are planning on Slytherin. 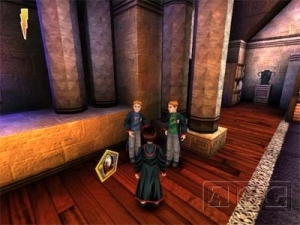 The other collectible items are the famous Witches and Wizards cards which are hidden in secret areas all throughout Hogwarts, some of the cards you can get from Fred and George but the Majority you will need to find yourself, collecting all 25 cards only gives you a slightly expanded ending to the game so its not really worth the effort unless you really want to get 100 percent.

The general gameplay is mostly 3D platforming which works extremely well using the keyboard and mouse, the game runs smoothly providing you play on an XP operating system  otherwise you will have serious lag and slowdown due to the game being so old. 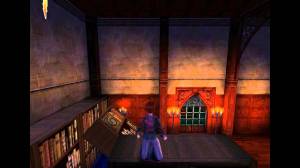 You will play levels based on many of the famous scenes in the movie by far the most memorable part of the game for me was avoiding Filch and Mrs Norris in the forbidden section of the Library.

There are a few boss fights in the game but they are not that difficult as most of time just casting spells blindlessly will defeat them, the only boss I even had the slightest trouble with was the final boss and even he wasn’t that difficult.

The music is very memorable of the film which is a nice addition to the game, not all the music is from the movie but the original tracks are also very fun to listen too so its difficult to complain about

Harry Potter and the Philosophers Stone for the PC is a decent title in the Harry Potter game franchise, this particular version is a lot of fun but it is way too short as it can be finished with just a few hours, the game also feels very bare as most scenes from the film are missing which really is a shame, on the bright side there is a level based on a section which was only in the book which is a nice touch, it has tight controls, fun music and ok game play.

Unfortunately as much as I enjoy this game it is not one of the best Harry Potter games I have ever played but it is a lot of fun for what it is so I am going to rate this game slightly better than an average score 5.5/10