Well I finally caved in and bought Disney Infinity

Disney Infinity is Disney’s answer to the Skylander’s franchise, in a very similar fashion to its competitor Disney Infinity requires the players to purchase toys in order to play the game. 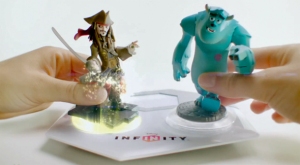 The way this works is that you will need to place the figures you have purchased onto the Disney Infinity base, Once you place the characters onto the base they should then appear in the game (ADD ONE FOR SINGLE PLAYER AND TWO FOR MULTIPLAYER!!), once the characters appear in the game you can then either play around in the toy box or you can play a play set (Campaigns), to access a play set you will also need to add that play set piece to the Disney Infinity base.

If you decide to play in the toy box, you will be in a sandbox style game which allows you to simply build your own Disney Infinity worlds, which you can then play in these worlds with various characters including those who are not part of any play sets. 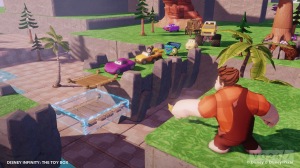 I’m not a massive fan of the toy box mode but I’m sure that the reason for this is my lack of interest in sandbox style games, the toy box mode has a lot to offer and can be great way to pass time when your bored or have friends over, you can add many different objects and toys to your world and many of these can be interacted with, for example if you add a car you can drive it, if you add a weapon you can use it to destroy enemies and you can even build race tracks.

You can earn new toys and items for your toy box by using the Disney Infinity Vault, You gain these items by using a random selector, you can change the items by selecting shuffle and you can gain an item by selecting spin, this will give you a random item from the list that is shown at the time.

When you add new characters to the Toy box they will be added to the Hall of Heroes, the Hall of Heroes is where you can see your entire collection of figures presented as statues, once they reach level 1 they will gain a bronze statue, but if you level them up even more they can be upgraded to a silver or gold statue. 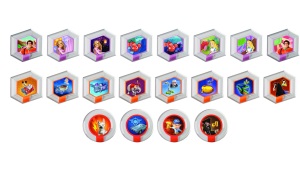 When your done messing around in the toy box, you may want to play some of the many campaigns that are available within Disney Infinity 1.0.

The Starter pack comes with three different Campaigns which are based on different Disney properties, the campaigns that come with the game are Monsters University, The Incredible’s and Pirates of the Caribbean, each of these campaigns offer a different game play style.

The Monsters University play set has the player taking control over Sulley, Mike or Randall, the objective is too help Monsters University gain more fear it week tokens than their competitive college Fear Tech, the way you earn these tokens is by scaring over students, vandalizing the Fear Tech campus and by setting up pranks all over both the MU and Fear Tech Campuses.

The Incredible’s play set is full of intense super hero action, you can take control of all the entire Parr family (Mr Incredible, Mrs Incredible, Dash and Violet) and as a small treat you can even play through the entire play set as the films villain Syndrome, I think this is awesome but I would have loved it if Jack-Jack was a playable character or even better would be Frozone.

Your mission is too clear the city of Omnidroid’s, rescue the pedestrians from super villains, help the police capture and arrest many creative villains and trouble makers and finally defeating Syndrome once and for all. 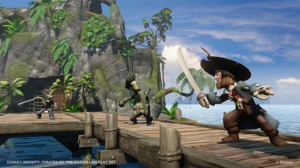 Last but not least the Pirates of the Caribbean play set is an adventure style game filled with swashbuckling action and piracy, you can play as either Captain Jack Sparrow, Captain Barbossa or Davy Jones.

In this Adventure you must find hidden treasures which when combined will create a super weapon which can be used to help defeat the dreaded Kracken, a unique game play style to this particular play set is that it offers the unique ability of customizing and sailing your own ship across the ocean giving the player a sense of freedom for exploration and adventure.

Each of these play sets allow the player to purchase new items in the toy store for example in monster inc you can buy a paint ball gun which you can use to shoot students and in Pirates you can buy new swords for your character and new cannons for your ship.

Graphically Disney Infinity has a very cute and very interesting art style, the majority of the game looks very cartoony and everything is drawn like a toy, for example when you play as a character you will notice that you can see where the arms and legs have been attached to the body, also when you die in the game your character will explode separating its limbs from its body.

I really like that the game looks like a giant toy set because this helps give off the illusion that the figures you buy are toys and not just regular figures, this makes spending your money on Disney Infinity feel more rewarding when compared to similar series such as Skylanders and of course Amiibo.

The Audio is nothing special as its either just the music from the movies or its new tracks that are generally not that memorable or interesting.

Disney Infinity 1.0 is a great game if you like the Disney properties, due to the type of game that Disney Infinity is it’s not worth the money if your not willing to empty your wallet on all the characters and play sets, apart from this it has great controls, adorable graphics and is genuinely very addictive and a lot of fun to play, the only downside is the lack of decent audio tracks and lack of game play for people who don’t want to get into the collection side of things.

Personally I am a collector and I will be releasing collection updates when I upload small reviews of the additional play sets.

I hope you enjoyed my review of Disney Infinity 1.0