I have reviewed many anime films on this website but have never gone over a show before, I suppose I have to start somewhere and what’s a better show to start with than the mind bending sadistic show that is Death Note !

This is Light Yagami an intelligent high school graduate and natural genius, Light is the first human in the anime to find one of the famous note books known as a Death Note, a Death Note is a notebook owned by a Shinigami (God of Death) and if a human beings name is written in the Death Note that human being will die of a heart attack after 40 seconds, the author of the Death Note can choose the method of death if they write that in the Death Note within 30 seconds of writing the victims name, another rule is that they can only kill a victim with the Death Note if they know the face of the person they are killing the reason for this rule is that there may be many people who share the same first and last name 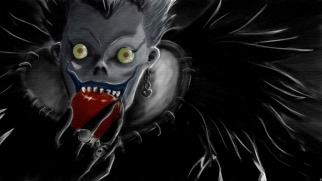 Ryuk is the Shinigami that dropped the Death Note into the human realm, he did this for his own entertainment and he enjoys watching Light use the Death Note.

Light originally uses the Death Note to kill criminals, his father is the chief of police and because of this he has been brought up with a strong sense of justice, unfortunately for Light his mysterious murders start a serious police investigation that is led by his father, he also gains a lot of support from followers who think of Light as a god and these followers refer to him as Kira which is the Japanese pronunciation of the word Killer, the police hire a private detective who is known as L, L suspects Light of being Kira and he sends people to investigate him this makes Light begin his journey towards madness and he begins to use the Death Note to kill anyone who gets in his way making him a very dangerous serial killer.

Later on into the anime Light actually joins the investigation team that is investigating him, the show gets really intense the further you get through it and its really cool to see just how psychotic Light becomes when his evil persona begins to take over his life.

Without giving away too many spoilers that’s about all I can say about Death note, it is one of the most unique anime I have ever seen, the animation is amazing for 2007, it uses a great blend of shadow and light effects to help emphasize the dark nature of the show as well as to give the art a more realistic style, I thought the voice acting on the English dub was very well done its not often that you can notice the amount of love and effort that was put into every characters personality and style of voice, I cant say much about the music in the show, none of it was that memorable and I didn’t even enjoy the theme song that much.

Death Note is a very popular anime and it has reason to be, I don’t think it could be recommended for everyone due to how dark the premise is but if you like dark anime then you should give this one a shot.

I hope you enjoyed this review of Death Note

You can contact me at ragglefragglereviews@gmail.com
You can find me on miiverse by searching for draskafer