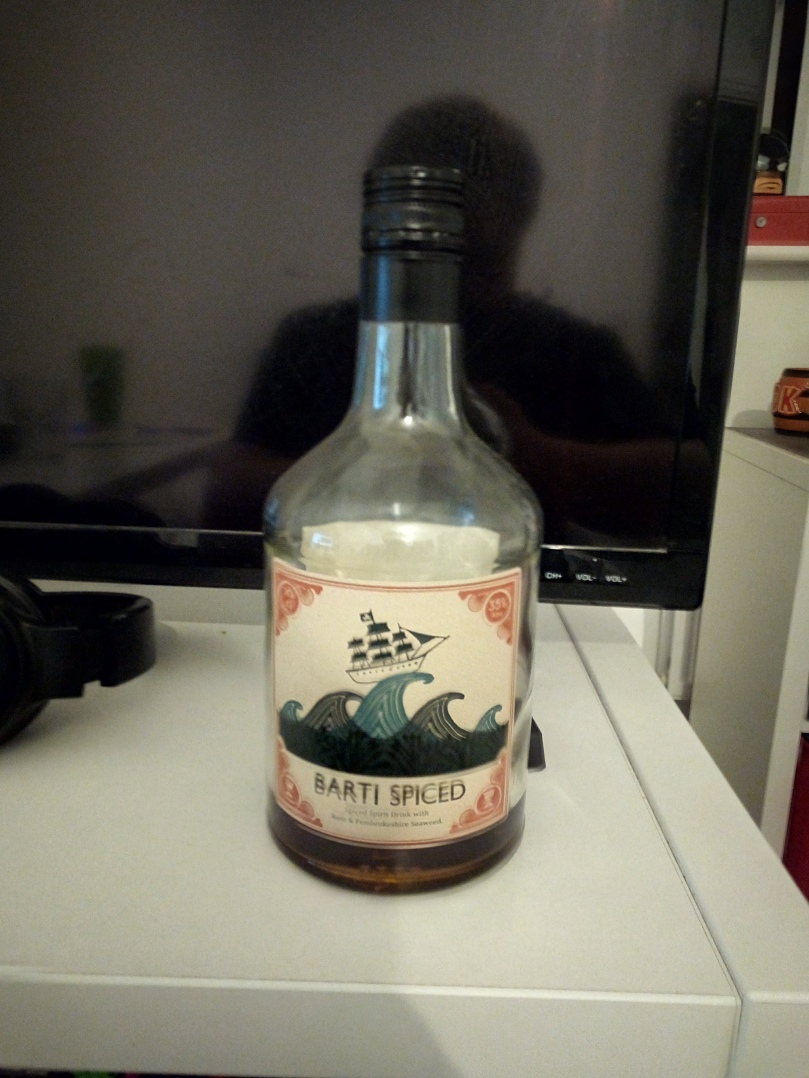 Welcome to my third rum review on this website, tonight I have decided to finally talk about Barti Spiced.  Three things to note about this bottle 1 it used to be called Barti Ddu which is Welsh for Black Bart, 2 it is made locally in the county of Pembrokeshire in West Wales and 3 the bottle is nearly empty because I like this rum so much that I keep drinking it and that is already a good start.

Lets begin with the label the front has an illustration of a ship with a traditional skull and cross bones on the flag, now this was not Black Barts flag and I think it would have been more interesting to use his original design considering that due to how long ago he passed away it will be in the public domain. The paper quality is excellent here and has a very soft touch it almost feels a little fragile and crusted in a similar manner to aged paper, this is a nice touch and is very much appreciated. 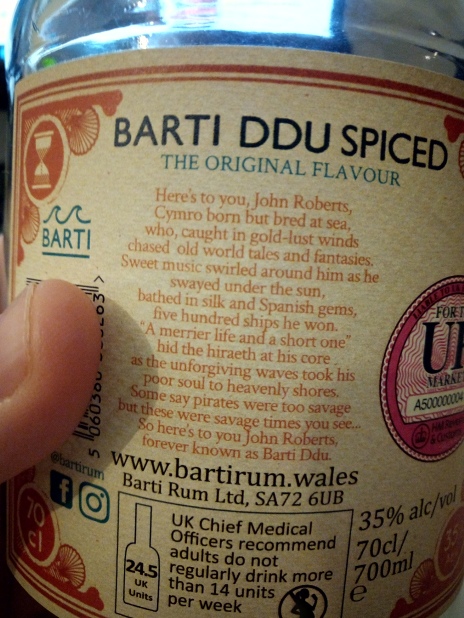 The back of the bottle gives some safety information and also displays the 35 percent alcohol volume, the best part of this label is the poem on the back “Here’s to you John Roberts, Cymro born but bred at sea, who caught in gold-lust winds chased old world tales and fantasies. Sweet music swirled around him as he swayed under the sun, bathed in silk and Spanish gems, five hundred ships he won. A merrier life and a short one hid the hiraeth at his core as the unforgiving waves took his poor soul to heavenly shores. Some say pirates were too savage but these were savage times you see…So here’s to you John Roberts forever Known as Barti Ddu.

In 2018 a competition winner for Barti turned these words with a few changes into a really nice song that is now used in its advertising, here is a link.

The wording on the back of the bottle I believe is in reference to Black Barts death and the treasures he was wearing at the time of his death. 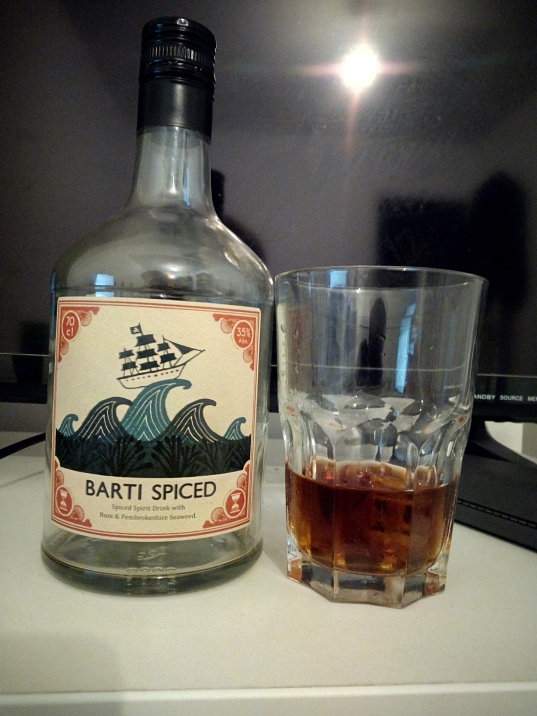 With a now empty bottle and some ice in my glass its time for the taste, it needs to be stated that one of the main ingredients of this drink is locally grown seaweed and you can smell it along with the spices when you open the bottle, they blend very well and the smell is divine. This is nice mixed with cola but I actually prefer it on its own, it has a slightly sweet taste but the flavours of the spices and seaweed are a match made in heaven, the flavours dance on your tongue and are absolutely delicious, there is a little kick to it when it hits the throat before finally giving you warmth. This is the best alcohol I have ever had this and it is well worth the 30 pounds cost, it makes me very proud to live in Pembrokeshire and I highly recommend that you buy a bottle if you visit or you can purchase it on Amazon.co.uk.

I hope you enjoyed this review, its not often I buy different rums so it was nice to talk about this one.

Here’s to you John Roberts for ever known as Barti Ddu.

One thought on “Barti Spiced Review”