You know that great game on the NES super Mario Bros 3 yeah that games awesome right, with all the different worlds you can visit the creative level designs, fun boss fights , amazing music and overall a great experience which will live in our hearts forever.

Now imagine if Mc Donald’s took that game and cooked up a rip-off so bad that it gives us the opposite effect boring level designs, only one pathetic boss fight at the end, music so annoying it can drive you insane and a story line so stupid a kindergartener could have come up with a better one, well I hate to say this but that did happen and what we got left with was a horrible abomination known as M.C Kids or Mc Donald’s Land if you live in Europe. 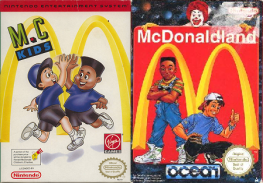 The two game heroes Mick and Mac are reading a book in a tent about Ronald Mc Donald and his magic bag.  The next day Mick and Mac are approached by Ronald Mc Donald he wants their help because the Hamburgular has stolen his magic bag and Mick or Mac depending on which character you chose has to go through all the different Mc Donald’s worlds to find Hamburgular so they can retrieve the bag and return it to Ronald.

It always puzzled me why Ronald Mc Donald would ask two Children he has never met to help him,  don’t they have police in Mc Donald’s Land and why these two kids is it because they are reading a book about him and fate brought them together or maybe he’s just a paedophile yeah that’s probably it.

I got to admit the game controls do feel quite smooth as there is not a delay when you are jumping or attacking.

You’re attack throughout the game is pretty stupid you have to throw blocks at enemies to kill them and this is the only way,  if you try to jump on an enemy like Mario you will lose part of your health.

You’re health is displayed as hearts sort of like a Zelda game the only difference is that Zelda games are actually fun to play unlike this piece of crap.

Apart from those terrible Zelda games on CDI their even worse.

Just like Super Mario Bros 3 you walk across an overview map to select a stage and the idea of the game is to make your way through a number of themed Lands before you can confront the final boss. Mc kids does play its cards a little differently though as the game itself will not allow you to proceed to the following worlds without collecting a set number of character cards which are hidden throughout the different levels. The idea of having to collect items to proceed just didn’t feel right in this game as it made the whole experience really frustrating and with the game not being fun to play on its own this feature only makes the whole experience much worse.

The six worlds include

While adventuring across the six lands you will come across a lot of in game enemies which Mick and Mac should try and avoid at all costs, these enemies are pretty pathetic as they mostly consist of cute furry forest animals which never seem to be doing anything that could possibly be a threat to Mick and Mac, but touching the animals will still take Mick and Macs life away so your best bet will be to kill them providing you can actually find enough blocks to kill the animals with.

The graphics in this game look bad even for NES standards there is hardly any detail on the characters, levels or enemies and Mick and Mac look like really creepy dolls in the beginning cut scene 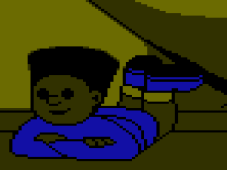 The music in the game suits the levels really well as it really helps the game give off a nice relaxing feeling when you first begin and it gets more and more intense throughout the entire game. The problem with the music is that it gets boring and annoying fast as it always seems to be a small tune which is looped constantly especially the music in the Final world where the music is so annoying I usually do that part with the TV on mute. The Music in Mc Kids is really the marmite of the game you either love it or you hate it.

There is only one boss though out the entire game and it’s not Hamburgular it’s the magic bag itself, it’s a pretty pathetic boss battle since all you have to do is throw rocks at the items the bag throws at you.

Eventually a rabbit in a hat pops out throw a few rocks at the rabbit and that’s it the game ends with a really shitty ending which I’m not going to explain just in case you guys actually want to play this game. 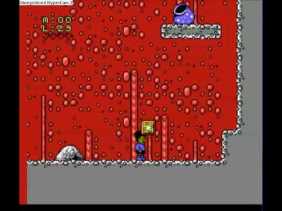 I’m going to give Mc Kids for the NES a 5/10 because it may not be a good game but it’s not a terrible game either because it does have some enjoyable aspects it just suffers from a lot of serious issues which really take away the experience the game is trying to give, Mc kids is a mixed opinions game so it deserves a fair rating of 5/10. I hope you enjoyed this review of Mc Kids this is my opinion of the game if you respect my opinion I will respect yours.

Thanks for Reading this Raggle Fraggle Review

This review was written by Dan