Welcome to Steven Spielberg month, every week throughout
April I will be publishing a review of a movie directed by Hollywood legend Steven Spielberg, I have no choice when it comes to choosing the films as the four movies will be chosen randomly for me

The first movie has been chosen and its a classic so without further ado lets talk about E.T. 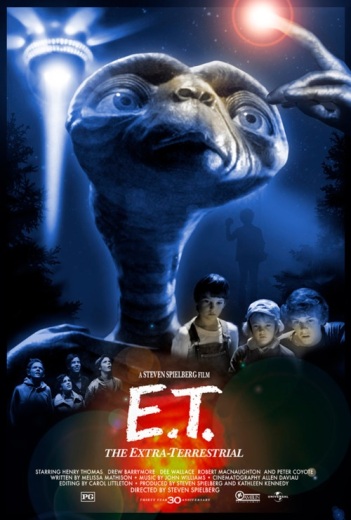 E.T follows the journey of an alien that gets lost on earth, this cliche has been done a million times before but unlike most other attempts at this idea E.T manages to stay much more serious and less comedic, E.T isn’t just a film about an Alien trying to get home but it focuses more on how to deal with a lot of real issues that children struggle with, a lot of this is seen through the young boy Elliot as throughout the movie he struggles to handle his parents recent divorce and he gets bullied on a regular basis, Spielberg manages to capture all of this and teaches the younger viewer life lessons without pushing it down their throats, the lessons are very subtle but easy enough to spot if you know they are there, the biggest lesson in E.T is about the hardships of saying goodbye to someone you care about, of course this is due to the divorce but the entire movie essentially focuses on this lesson since the plot is about Elliot having to accept that E.T needs to be back home on his own planet

E.T is a very special movie and not only for the audience, did you know that the movie is heavily based on an imaginary friend Steven Spielberg created after his parents got divorced in 1960?

When the movie came out it surpassed Star Wars for highest grossing movie of all time and even though that isn’t the case today it’s hard to believe that at one point there was a more popular science fiction movie than Star Wars.

The cast (image above from the 20th anniversary reunion) were all great but none stand out more than Drew Barrymore who played Gertie, that is not the say the rest of the cast were not as great as Drew, Peter Coyote does a fantastic job as Mr Keys and Dee Wallace knocks her performance out of the park as the mother but as for the rest of them although they did put a lot of effort into their performances I didn’t personally enjoy them as much.

E.T has a lot of iconic moments that have remained in peoples hearts since the first time they watched the film, for some people its when you spot Yoda in the Halloween scene, for others its the part where E.T uses his magic to heal a cut on Elliot’s finger, for me it doesn’t get better than the famous flying bike scene and lets not forget the phenomenal musical score by John Williams whose name I am sure will be turning up in a lot of these reviews, all of these moments are amazing and are a good reason to pick up a Blu-ray however there is no directors commentary for this film and that is a real shame because for me directors commentaries are the best part of owning a movie and few films could really benefit from one more than E.T.

Thankyou for reading the first review of Spielberg month, who knows what we will be diving into next week but if its anything like E.T its going to be pretty magical.

Want to buy this weeks movie? click the link below to get in from Amazon, I recommend subscribing to Amazon Prime to get fast next day delivery as well a lot of other benefits.