We have finally reached Halloween 2017 and this month we will be taking a look at eight classic monster movies from Universal Studios, the reason I have chosen to talk about some of the older horror flicks compared to the newer releases is because of the importance these films have to the film industry a lot of these old horror movies have been the inspiration for a lot of new horror films and they helped shape the genre and style that the modern horror brings to the big screen. 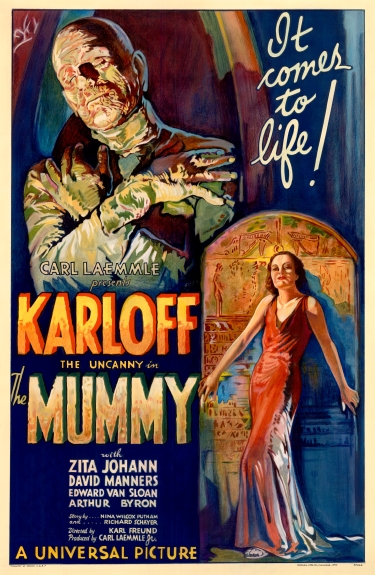 The first movie we will be taking a look at is the Mummy, a lot of people associate the Mummy with the 1999 film starring Brendan Fraser and many believe it to be the original film when in actual fact it is a remake of the 1932 classic which stars Boris Karloff as the titular character. 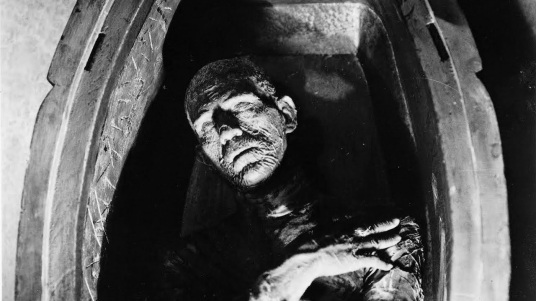 The film starts in 1921 where we are introduced to Sir Joseph Whemple and his assistant Ralph who discover the mummified corpse of a man named Imhotep, clutched in his hand is a sealed box which clearly states that it should never be opened, of course it wouldn’t be a horror movie if someone didn’t open the box, upon opening the box the scroll of thoth is discovered which if read has the power to resurrect the dead, needless to say Imhotep is resurrected and escapes from the archaeology site

We skip to ten years later and Imhotep has a new look and a new identity, the Mummy is now referred to as Ardeth Bay who reveals the location of an ancient princess’s tomb which the new archaeologist team quickly discovers and the body is sold to the Cairo museum, its here that we discover that the Mummy is just as much of a love story as it a Horror, Imhotep begins to stalk a young woman called Helen Grosvener who he believes to be the reincarnation of his long lost love but unfortunately for him Helen has fallen for someone else and this only makes Imhotep want to Mummify Helen so he can keep her all to himself and its up to Helen’s true love to save her from the clutches of the Mummy.

The production of the Mummy was quite intense, Boris Karloffs make-up was done by the late Jack Pierce who was famous for doing most of the makeup for the old monster movies back in the day, Karloffs make-up took a very long time to put on and real bandages were used as part of the make up but unfortunately the bandages got stuck to Karloffs body and removing them each day after shooting was apparently agonizing for the actor and to make things worst it was a full body job and Jack Pierce forgot to give Karloff a way to pee so poor Boris had to hold it in for very long shoots, the actress Zita Johann who played Helen Grosvener in the film didn’t get along with the director Karl Freund, Karl had never directed a movie before as his expertise was being a cameraman and Zita who at the time was a very famous actress would speak her opinions very clearly to Karl who didn’t  enjoy the criticism, this led to the two of them always snapping at each other and Karl treating Zita with less respect than the other actors, he wouldn’t even give her a chair with her name on it when every other actor got one.

The Mummy is a great film, the cast is fantastic and the movie always keeps an entertaining and consistent pace which helps to set the atmosphere for the movie, unlike most of the other Universal Monster films the Mummy never got any sequels but it did get a few remakes most noticeably being the 1999 film and the 2017 film starring Tom Cruise, the Blu-ray of the Mummy has some brilliant special features including three documentaries and even a commentary track which makes me very happy, the Mummy is a classic horror which needs to be seen its part of a Blu-ray box set which can be bought on Amazon and its this box set which I am using for my reviews this month