“What do you dream, when you dream Little Nemo” 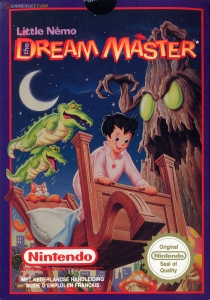 Little Nemo the Dream Master was a game created by Capcom for the Nintendo Entertainment System, the game itself was based on a series of comic strips titled Little Nemo in Slumberland which ran from 1905 to 1926.

The comic depicted a young boy called Nemo and the adventures he went on in his dreams, the comic strip was very creative and completely original at the time. 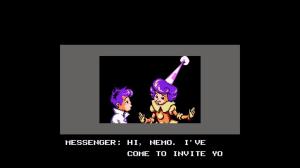 As you may have guessed the game takes place in Nemo’s dreams and within the fictional world of Slumberland, One night Nemo is visited by the royal messenger who tells him that the Princess of Slumberland has requested Nemo to be her playmate, Nemo isn’t fussed on the idea at first but after much persuasion he eventually agrees and is given a gift of candy, Nemo climbs aboard the Royal Messengers blimp and they both fly to Slumberland.

In the game you take the role of Little Nemo and its your objective to collect a set amount of keys to open the door at the end of each stage, the game is a platformer so expect to be doing a lot of jumping, unlike most platformers of the time this game a has a twist as Nemo will need to take the abilites of the animals around him to reach hard to reach places and too pass certain obstacles, you take these animals powers by throwing candy into their mouths until they fall asleep and once they are sleeping you simply jump onto that animal in order to have full access to their unique abilities.

You cant use the candy on all the creatures in the game but the vast majority of creatures do allow you too feed them the candy, depending on which creature you knock out will determine what new ability Nemo will gain, for example if you take the frogs ability Nemo will be able jump much higher than usual, taking the bee’s ability allows him to fly, taking the gorillas ability allows him punch things with brute strength and riding the lizard allows Nemo to walk up vertical platforms.

these are just a few of the many unique abilities available in the game.

When you finish a stage you are presented a small cut scene of Nemo waking up and his mother yelling at him to go back to bed, these cut scenes are very cute but they are also a very clever nod to the original works by Winsor McCay as the comic strips he wrote also ended in this manner.

This game is pretty adorable and it has a fairly innocent plot but be careful where you tread as this game is also very difficult, I personally find the game to have a similar feel to Ghosts and Goblins which is another very difficult platfomer made by Capcom for the NES, Little Nemo is not as difficult as Ghosts and Goblins but it definitely requires a lot more strategy due to having to constantly switch between the different animal abilities as well as needing to collect the keys before finishing each stage.

The game may be difficult but the level and character designs are wonderful, since the game takes place within Nemo’s dreams the levels are very imaginative, the first few levels are fairly basic with simple setting such as a forest and Nemo’s  backyard but the later levels are very cool and creative some of my favourite stages include Nemo’s House which has the player controlling a pint size Nemo through his home while helping him avoid everyday objects such as dishes and cutlery but at a much larger scale. 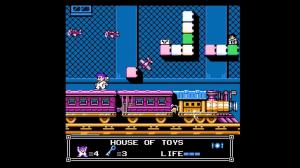 My favourite stage is called the House of Toys this stage is an on rails platformer, Nemo is in a toy room and is riding  a toy train, while riding the train Nemo will need to act fast to avoid enemy attacks and too collect the keys, the train is extremely well animated and the train noises are very impressive and to a point even quite realistic considering the restrictions of the NES and it honestly blows my mind every time I hear it.

From the opening cutscene to the end credits the games graphics are truly something to marvel, everything is extremely well animated, pixelation of the backgrounds, landscapes and general art style is smooth and nice to look at and the colours choices really suit the games innocent and charming atmosphere.

With this being a Capcom game as you might expect the music is absolutely superb, the music isn’t quite as fast and upbeat as the music you may hear in the Mega Man franchise nor is it quite as intense as the Music in the Ghost and Goblins or Demons Crest series, the music is very innocent and at times even quite relaxing and this suits the games atmosphere because before the final stage the game is not at all scary and Nemo isn’t not really threatened so the nice music is a good choice and when you do reach that final stage the music does change to a more darker and scarier tone, the music is very memorable and I often find myself humming it on a daily basis.

With such a difficult platformer you need good controls and luckily the controls are tight and very responsive, the controls them selves are very easy to learn, and the simple layout of the NES controller makes the games controls and general game play easy to grasp for any player.

Little Nemo the Dream Master was a risky choice for a video game due to the original works ending 64 years prior to the games release, the game is an innocent little platformer with difficult but fair game play, some of the best colour choices and level designs of any game for the NES and the music was a very smart choice from the developers due to its calm and friendly nature suiting the game perfectly.

Little Nemo the Dream Master is the type of game which quite literally a dream come true for many gamers due to it’s innocence, fantastic gameplay, and overall charm.

The game is perfect,not only is it a fantastic example of a hidden gem for the system  but I would also argue that its one of the greatest games ever made.

Also me and some friends have recently started playing games together so please check out our YouTube Channel Hoenn Rangers, I love Little Nemo and so do my friends so one day we may play the game on the show.