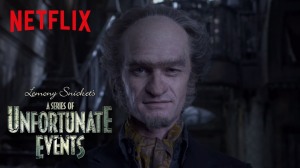 Let me be completely honest I was afraid for this show, an adaptation of the book series by Lemony Snicket had been done in the past in the form of a movie starring Jim Carrey and even though the film was somewhat entertaining and Jim Carrey gave one of the best performances of his career, the film was a terrible adaptation of the books and this was one of the many reasons why it bombed and none of the planned sequels were ever released.

This time the notorious Count Olaf is portrayed by the multi-talented actor Neil Patrick Harries who does a fantastic portrayal of the Count, Jim Carrey gave a more serious and sinister version of Count Olaf while Neil Patrick Harries gives a more silly and comical peformace while still managing to remain threatening and scary enough to help the show remain family friendly, the rest of the main cast are also very well portrayed and the actors and actresses who play each role put a lot of effort and love into their peformances, the show so far has shown a few other famous faces aside from Neil Patrick Harries including Patrick Warburton who plays Lemony Snicket and Joan Cusack who plays Justice Strauss, cast members who are less experienced in acting also do a fantastic job at playing their assigned characters but out of the entire cast my favourite actor was Louis Hynes who plays Klaus, i found that he was very similar to the character in the books and I cant wait to see more of his work in the later seasons.

Speaking of the books the TV show is such an impressive adaptation that I only noticed very few differences between the two, the first season of the show covers the first four books which are spread over eight episodes, at first I was concerned because I didnt believe that two episodes per book was enough to cover everything but I was wrong because now that I have watched the first season several times I have to agree that two was more than enough, the show is much more light hearted than the books which is understandable as the books can at times be a little much esspecially for very young readers but I honestly believe that it would be fine for any one to watch the show no matter what age they are.

It was very difficult for me to talk about this without giving away any spoilers but I am pleased that I got the chance to share my thoughts, if you would like to see the first review of the books I wrote you can do so by clicking on this link.

What did you think of this latest adaptation of a Series of Unfortunate Events?