The Legend of Zelda Oracle of Seasons and Ages are the seventh and eight games in the franchise, they were developed by Capcom for the Nintendo Gameboy Colour. These games are very unique entries to the series because they are both heavily connected and should be played one after the other in order of the players choice.

In order to connect the games plots after finishing one game you will be given a code to enter into the other game to get the conclusive experience.

I have decided not to discuss many details of the linked versions of each game because while they have some plot differences and connections, It would be quite major spoilers and for the the most part the base game and dungeons are practically the same with an extended final boss.

In Oracle of Ages the Triforce sends Link to the land of Labrynna, here he meets Impa who asks him to move a boulder so that she can listen to the Nayru the Oracle of Ages sing, unaware of the mistake he has made Link helps Impa to find that she had been possessed by an Evil spirit called Veran, Once close enough Veran leaves Impa and possesses Nayru instead.

With Veran now possessing Nayru, a plan to affect time and bring sorrow to the world is in motion, Link visits the Maku Tree who explains that by collecting the eight essences of time Link will be given enough power to defeat Veran pushing Link to travel through time to discover them and save the Oracle of Ages.

You can find the essences of time by completing dungeons that are hidden across the map, these dungeons are very challenging and are packed with tricky puzzles, personally I would argue that these puzzles may be some of the most challenging in the franchise.

New items in this game are seeds, there are many different seeds in the game you find, each of these allow Link to perform various abilities including lighting fires, attracting enemies towards him, awakening owl statues, running at fast speeds and teleporting across the map to different locations.

The only other new item that is important to the game experience is the Harp of Ages, you able to learn multiple songs in the game which allow Link to alter-time and travel freely between the past and present. 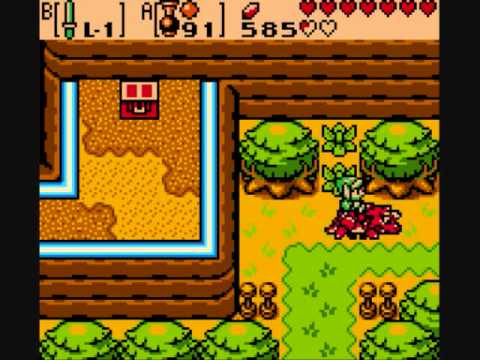 During your adventure Link will come across three animals that need his help, A flying bear, A boxing kangaroo and Dodongo that can swim and climb waterfalls. After experimenting with these animals and testing their abilities you will later on have the opportunity to keep one of them as your main companion, this is done by finding or winning one of three flutes in the game. This is unique to both games and your animal companion will be transferred between the two games.

There are many hidden rings in both of the games, by paying for them to be appraised you will unlock the rings ability, these can either upgrade of downgrade various aspects to Links character including but not limited too strength, defence, speed etc. These rings can be transferred between both of the games.

Oracle of Ages has one of my favourite soundtracks in the Legend of Zelda video game series, the music in this game is a lot of fun and really quite creative, it uses a lot of original tracks that suit the game perfectly but it also uses a lot of bit tunes of tracks from Ocarina of time which is one of favourite games ever.

The Legend of Zelda: Oracle of Ages can easily be considered an almost perfect game, it has a great plot and a really excellent soundtrack but I feel its held back by how its never very clear where you need to be going and a lot of this is because of the in-game map, its not very clear where things are and it can be a pain teleporting across the map only to find its the wrong area I had a very similar issue with the Links Awakening DX  but apart from that I really like this game and I think its only fair that I give it a good rating of 9.8/10 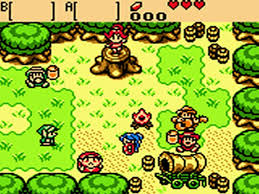 In Oracle of Seasons Link finds himself exploring the Land of Holodrum where he meets Din the Oracle of Seasons and Dances with her, during this time the evil Onox kidnaps the Oracle and the seasons of the Land become completely out of control leaving Link to discover the 8 essences of nature to restore balance to the world.

Right off the bat the over-world map is a lot more interesting here than it was in ages, not only would I argue the encounters are better including the trade sequence but a new puzzle element has been added outside of dungeons in the form of seasons. In the game Link is able to find wooden stumps that he can stand on and use the rod of seasons to change the seasons in game which heavily affects the over-world map in different ways, I found this much more interesting than the time travel in Oracle of Ages.

The dungeons in this game are more focused on combat so they are much tougher with enemy placements and have much more difficult boss fights. I prefer more puzzle based dungeons myself but they were a lot of fun here as well. 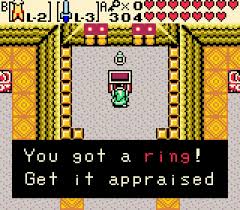 The Animal Companions are also in Oracle of seasons and have the same uses as before, the game also uses rings that you can collect to enhance or downgrade Link throughout the game.

The game has a stellar soundtrack which is highly enjoyable to listen too and just like Ages it also uses bit tunes of tracks used in other Zelda games.

Oracle of Seasons is just as good as the Oracle of Ages although they are quite different, this one if more combat based and it was a lot of fun. It is a very difficult Zelda game and is a little unforgiving to its players with how difficult it can be at times but with good practise it can easily be beaten. If i’m being completely honest I seriously think I prefer this game even though it has less puzzles, it handled the characters a lot better than Ages and the majority of them had some importance to the game which made the world a lot more memorable and interesting. It is still very cryptic and the map sucks but that is to be expected considering that Ages had the same issues, overall It is only fair to give this the same score a tidy 9.8/10

I held off from playing these games for such a long time because of how they are connected, I was worried I would be bored playing two Zelda games in a row but I was pleasantly surprised to find that this wasn’t the case and they are very well designed and are great fun. It doesn’t matter which order you play the games in but I do recommend that you use the secret code in the second game you play so that you get the true ending. I wonder if they will ever try something so ambitious with this series again, I really hope so but only time will tell.

Thank you for reading my review of The Legend of Zelda: Oracle of Ages and Oracle of Seasons for The Gameboy Colour.