One of the biggest announcements for the new Zelda game coming out in the next couple of days was that Nintendo is adding Downloadable content which is a first for a main series Zelda title, as you can imagine this announcement has split fans, some people including myself couldn’t care less but others have been cancelling their pre-orders for the game. 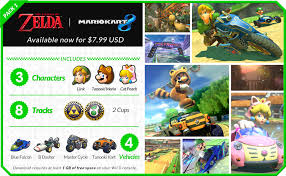 First of all this is not the first time Nintendo has added DLC to their games, they added new tracks and characters to Mario Kart and new stages and fighters to Super Smash Bros Wii U/3DS, I don’t recall so many people complaining when DLC for those games were announced but to be fair Breath of the Wild is a bit of a special case because not only is it a single player experience but Nintendo announced DLC before the game had even been released which lets be honest was a fairly stupid move on Nintendo’s part.

So whats my stance on this whole DLC malarkey? well like I said I don’t care about DLC in general and it isn’t likely that I will buy DLC for any games that are not Mario Kart or Splatoon, I don’t agree with any first party single player games having DLC (Zelda, Mario, Metroid and so on) but I can understand paying to add new content in multiplayer games at a reasonable price of course, I feel that having DLC in single player games takes away a lot of the fun, I remember when I was younger you could unlock additional content in games by performing certain tasks, I will still never forget the first time I unlocked the original Prince of Persia game in the Sands of Time.

On a final note though I will say that we shouldn’t look at Nintendo as if they are different to every other game company in the world, yes they are late to some of these awful video game practices but every other company has been doing it for years and we all seem ok with them so why shouldn’t we give Nintendo the same respect and just accept the changes they are wanting to make, even if we don’t particularly agree with those changes.

Either way in only two days we will all be able to play on the Nintendo Switch and I personally cannot wait to run around Hyrule again without the dumb expansion packs.

I hope you enjoyed this semi rant

That’s it for Nintendo Switch Content now until we eventually get around to Reviewing Breath of the Wild which I’m hoping to have reviewed by the end of April depending on how long the game is.

One thought on “DLC in Nintendo Games?”