Created and released by Konami in 1991 the Simpsons Arcade Machine was extremely popular when it was sent to arcades. Not long after hitting arcades the game was ported to MS DOS and Commodore 64, these versions were poor in comparison to the original game and we wouldn’t see a very good port of the game until 2012 when it was released on Xbox Live and the PlayStation Network.

The Simpson family are walking down the street when they bump into Waylon Smithers who has just robbed a jewelry store, the diamond that Smithers had stolen falls into Maggies mouth, Smithers steals Maggie and runs away leaving the Simpson family to fight off Mr Burns Goons throughout various areas from the show on their way to The Nuclear Power Plant to take out Mr Burns and Smithers. 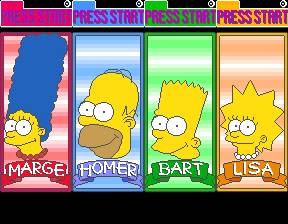 In the game you can play with up to four players and each player can be one of four characters Homer, Marge, Bart or Lisa Simpson. 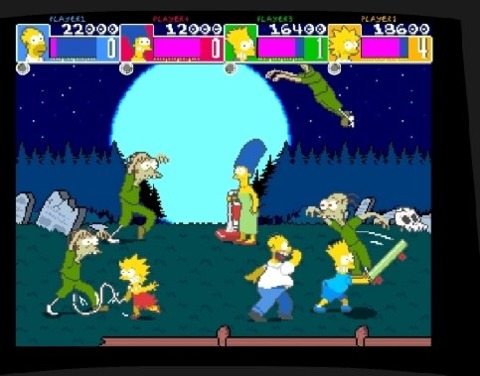 The game is a 2D Beat em up which has the Simpsons traversing through various areas and defeating variants of enemies until the screen has cleared and the player can move onto the next screen. Each character has one attack move and each fight in different ways Homer fights with his fists, Marge uses a vacuum cleaner, Bart rides his skateboard and uses it to attack enemies and Lisa uses a skipping rope to defeat her foes.

In multiplayer two characters can merge together to perform a super attack, these attacks change depending on which characters are being played.

Players can also pick up objects in the various environments to either throw at enemies or to use them as a weapon, the sling shot is the most useful in my opinion.

At the end of each of the 8 stages you will need to fight a boss battle, each boss is quite difficult and unique to the plot.

Konami has always been really good with their video game soundtracks and this game is no exception, the music is super fun and fast paced and still has that Simpsons feel to it. Its by far one of best soundtracks in a Simpsons game, click the video above to check it out.

The Simpsons Arcade game is a fantastic Arcade game and should be played if you ever get the chance, it is quite tough which is to be expected from games in the Arcade as they are made to make money, it took me 30 credits to finish the Simpsons arcade. If you want a decent version of the game to play at home you can purchase it on Xbox Live and PSN, the Xbox Live and PSN versions of the game even come with some additional modes. If there was anything I would say to improve the game it would be to add an additional attack button as just having one main attack gets a little boring after a while, but all in all the Simpsons arcade game is great 9.6/10.

I hope you enjoyed this review of The Simpsons Arcade Game